Lots of dark chocolate, Red Flame raisins, and a splash of cinnamon in a traditional Jewish sweet bread 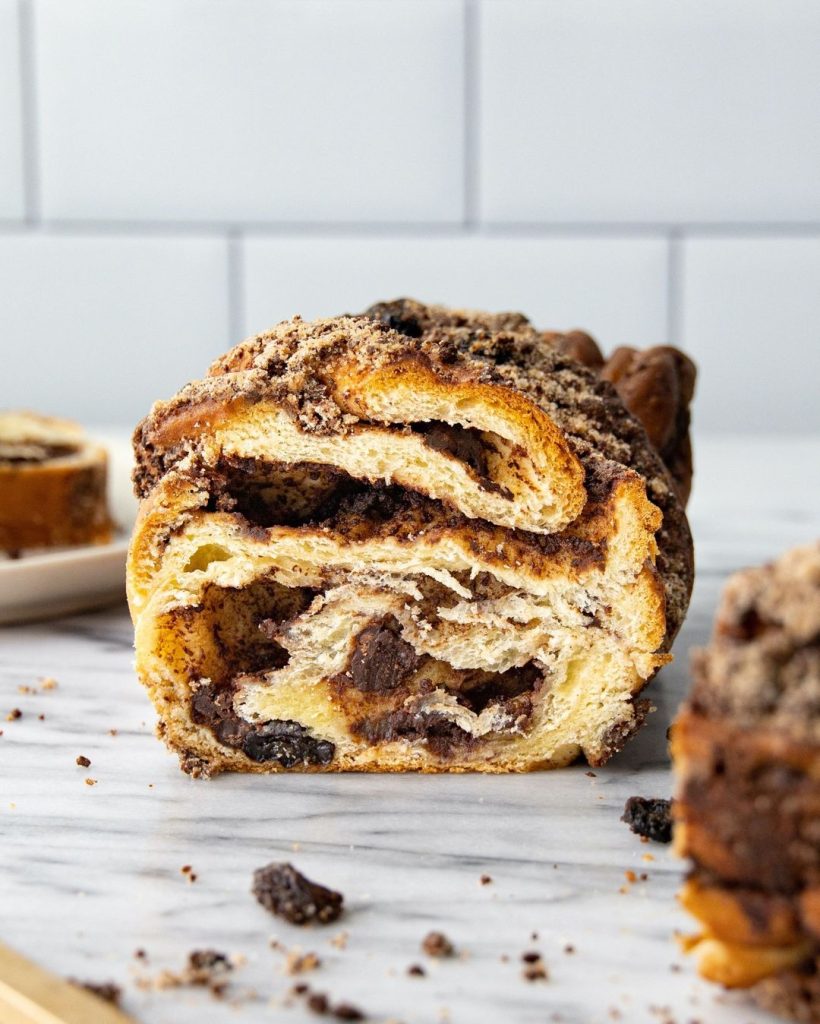 I’m going to stick my neck out here and say that along with the Bakehouse’s Classic Cheesecake, the chocolate raisin Babka is one of the best tasting things we bake! If you try it, you’ll be back, relatively soon thereafter, for another one! It’s a great gift as well as a marvelous way to start a day or end a meal.

If you’re not familiar with it, babka is a traditional Jewish “sweet bread,” akin to a light-textured coffee cake, or maybe a tad denser piece of Italian panettone. It starts with a rich, slow-rise brioche dough made with lots of butter, real vanilla, and fresh egg yolks. That in turn is painted with dark chocolate, sprinkled with chocolate crumble and orange-syrup-soaked raisins—all of which get formed into a fine-looking loaf, and then baked off to a golden brown with a fragrant cinnamon-sugar crust. To say that people love this stuff would be an understatement. It’s already got a LOT of loyal fans, and it seems to be gaining more momentum all the time. Writing in The Nosher last year, Joanna O’Leary described it as, “Part bread, part cake, and totally delicious: babka is among the most iconic Jewish sweets and a common fixture at the dessert table of religious celebrations.”

Babka’s history? It likely has its roots somewhere in Eastern Europe. One theory says it’s indigenous to Ukraine, part of an ancient fertility symbol used in the matriarchal system once in place in the region; the original name was likely “baba,” meaning “grandmother”; with the “modern era’s” smaller sizes, the name shifted to the diminutive, “babka,” meaning “little grandmother.” Historian and food writer Lesley Chamberlain believes babka came up from Italy, brought by Queen Bona in the 16th century, and developed over the centuries into what some would then say is a Russified version of the typical Italian panettone. In either case, the old forms of the babka were likely much larger, somewhere from the size of a modern day panetonne on up to some a few feet high. Historian Gil Marks believes its roots go back to the early 19th century—Jewish housewives would put some jam and nuts into leftover challah dough. The chocolate is most certainly a 20th century American addition, since it wouldn’t have been used in this way up until modern times.

Susana Trilling, author of the excellent cookbook, Seasons of the Heart, and creator and cooking teacher extraordinaire of the Oaxacan cooking school, and maker of those terrific chile jams I wrote about a while back, told me, “… bar none, Zingerman’s Bakehouse makes the BEST Babka I have ever eaten!! It was incredible.”

> Shop Babka at the Deli for PICKUP OR ANN ARBOR DELIVERY