Exceptional quality from an unexpected origin 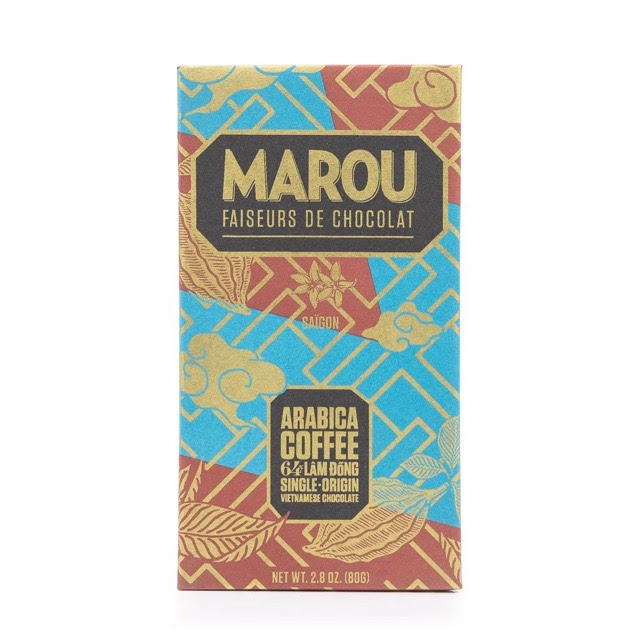 The combination of coffee and chocolate has been around for over four hundred years now. Chocolate came to Europe from the Western Hemisphere after Columbus’ return voyages; coffee arrived from Ethiopia and then Yemen (just across the water) to the south/east. The two were first, and most famously, paired up in the cafes of northern Italy in the late 16th century. These days, pretty much every American café serves some version of a “Mocha”—espresso, steamed milk, and hot chocolate. My preference though is to pair the two in the form of a really great, bean-to-bar dark chocolate that’s been appropriately and effectively blended with finely ground coffee.

One of my favorite offerings along this line comes all the way from Vietnam! It’s put together by the small artisan firm of Marou—with their dedication to Vietnamese culture and history, their commitment to stay true to artisan methods and excellence in flavor, their decision to stay small and local, they are very much the sort of “Small Giant” Bo Burlingham wrote about in his book in 2005. Neither coffee nor chocolate were indigenous to Vietnam, but as happened in Italy, both have thrived in this new locale. South Vietnam, it turns out, is an ideal climate in which to grow each. Marou was the first company in the country to make fine chocolate in Vietnam solely from locally grown cacao. All their chocolate bars are beautiful, both the flavor and also the artful paper in which they’re wrapped. A few years ago, The New York Times called Marou “The Best Chocolate You’ve Never Tasted.”

Coffee came to Vietnam in 1857. The original plantings were nearly all the high-quality Arabica beans. Over a century and half later, Vietnam has quietly become the #2 coffee producer in the world, behind only Brazil, though only three percent of what’s grown is still the original Arabica—which is the coffee you’ll find in this super fabulous bar. The coffee grown in the area around Lâm Đồng’s capital of Dalat is considered by many to be the best Arabica coffee grown in the country. The cacao for the bar comes from the Madagui district in Lâm Đồng province in the Central highlands of Vietnam. It’s a region of lovely waterfalls and national forests, and it’s just down the road from farms that produce the coffee. The coffee is grown at altitudes of about 2,500 to 3,500 feet above sea level, and it’s all Rainforest Alliance Certified production.

The bar is 64% cacao—dark but not over the top, slightly sweet but still subtly so. I’ve seen the flavor notes described by others as “honey, black cherry, roasted peanuts, dates, raisins, port wine, coffee, spices…” It’s got some nice tannins too that I like, as you find with a good Darjeeling tea. It’s great with a bit of one of those Bakehouse Graham Crackers I wrote about a few weeks ago. Nibble after dinner, as a mid-afternoon energizer, or as an accompaniment to your morning coffee!