One of my favorite teas has just arrived in Ann Arbor–This year, First Flush Darjeeling comes from the Jungpana Estate 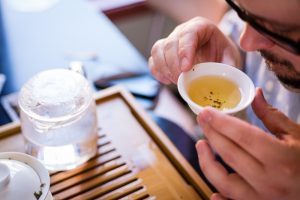 As we enter the final quarter of a year that’s clearly been a rather difficult one for everyone, here’s a small thing that’s been brightening my days. Drinking hot cups of the most recent crop of First Flush Darjeeling tea that just arrived last week from India. It’s been decades since I drank First Flush Darjeeling for the first time. There is no other tea, at least for my taste, that comes close to the edgy, exceptional, bright, and engaging flavor it brings.

If you aren’t familiar with Darjeeling, it’s the district in India that’s wedged up between the ancient kingdoms of Sikkim, Nepal, and Bhutan, in the foothills of the Himalayas. The name “Darjeeling” means, “Land of the Thunderbolt.” The town itself faces Mt. Kanchenjunga (which means, “Five Magnificent Snow Treasures”), the third highest mountain in the world at roughly 28,000 feet. By the long standards of Indian history, tea growing in Darjeeling is a relatively recent phenomenon, dating only to the middle of the 19th century. At the time, the town itself was tiny, used pretty much just as a resort and cool weather-escape by the country’s well-to-do classes. The mean temperature of the area overall is only a couple of degrees higher than London, but the region experiences a broad range of microclimates as you move through the seasons and up into the higher altitudes. The mountainous terrain makes planting and picking particularly difficult, adding a lot to the cost of Darjeeling in comparison to tea grown on more level terrain. Using the (all important for quality) Orthodox method that the best Darjeelings like this one use, plucking only the newest two leaves and the bud at the end of each branch. You need to pluck something like 11,000 shoots to make a pound of good tea. (See Zingerman’s Guide to Good Eating for more on the importance of protecting traditional Orthodox picking procedures. It’s a huge thing in the world of tea quality.) 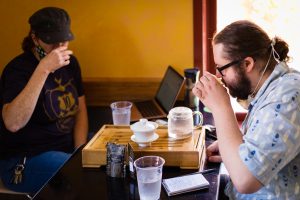 This year the First Flush we chose is from the Jungpana Estate, located in the heart of the Darjeeling district in the northeast of India up near the Himalayas. The first tea was planted at Jungpana in 1899, a few years before Robert Greenleaf was born in Indiana, by a British colonist named Henry Montgomery Lennox. After a few changes of ownership over the years, the Kejriwal family took it over around 1956 and they continue to run it today. They do world-class work—Jungpana has long been known as one of the best gardens in Darjeeling and produces sensational teas. So much so that they’ve been consumed regularly over the years by the Royal Court in London. Jackson Konwinski and Grace Singleton at the Deli selected the Jungpana this year after taste-testing a bunch of different samples of 2019 Darjeelings. (And Kevin Gascoyne, our importer, tasted many dozens to narrow things down for us before anything arrived in Ann Arbor.) They did a great job. The tea is terrific. Topaz colored in the cup, subtly sweet, an elegant sharpness that makes me smile, and the kind of long clean finish I love so much. It’s got a lot of that Muscatel flavor that’s the hallmark of great Darjeelings. A bit of toasted almond or maybe pine nut too. 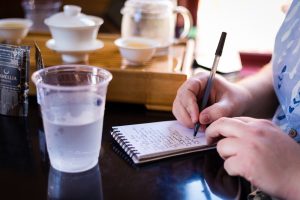 While Darjeeling’s name recognition has long been high, supply has always been low. All told—top quality and low grade combined—Darjeelings account for less than three percent of the tea grown in India. Of that Darjeeling, only ten percent or so is First Flush, and only about a quarter of that, in turn, can be counted on to be of top quality. Take note that far more Darjeeling tea is sold in the world than tea is grown in Darjeeling (yes, you read that right) so the more you know about the gardens where the tea was grown and picked, the higher the odds you’ve obtained the authentic article. Like olive oil, teas are generally at their most flavorful in the first few months after harvest. So, now’s the time to taste test this fine tea. On top of which, supplies are short. I’ll be drinking the First Flush Darjeeling regularly while we have it in. It won’t do away with all the world’s problems, but it does bring a delicious bit of calm, compelling flavor to brighten my mornings. Brew a pot, pour a cup, take in the aromas, breathe deep, sip slowly, and appreciate the day.

Shop for this tea at the Deli or online for pickup or local delivery.