An ancient grain makes its way into an Ethiopian-influenced granola 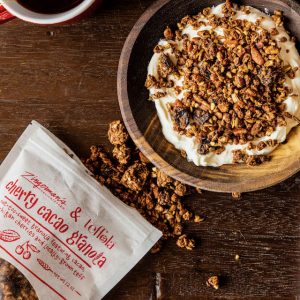 Looking for a lovely way to start your day? Teffola is a great new take on granola that could be just the ticket. It’s based on the ancient Ethiopian grain of teff, now being grown by a seventh-generation family farm in Addison, Michigan, about an hour southwest of Ann Arbor. Teffola is an inspiring collaboration with a local farm that promises all sorts of positive outcomes—it’s a chance to make the economy of a family farm more viable, it’s introducing a healthful new grain in a place where few people will have eaten it, and it’s bringing fantastic flavor to anyone who’s interested!

I first heard about the Smith family’s work with teff two and a half years ago from long time Zingerman’s supporter Sandy Wiener. Thirty months later, it’s on our shelves! Claire Smith, the 7th generation to work on the farm, shares:

What really sets us apart is our dedication to the ancient grains we celebrate in our products. Our namesake grain, teff, is grown on our 7th generation farm in southern Michigan—a climate vastly different from its natural Ethiopian origins. We started growing teff in 2015 after years of struggling to break even due to plummeting prices for traditional crops like corn and soybeans.

Her dad decided to try growing teff, and over time, it turned things around: “If he hadn’t made that choice,” Claire says, “we wouldn’t be here.” Teff, it turns out, was part of a Michigan State extension experimental project back in the mid-2010s. If you aren’t already familiar with teff, it’s one of the oldest cultivated grains. Native to the Horn of Africa, it’s long been a staple of Ethiopian eating where it’s the key ingredient in the classic Ethiopian sourdough flatbread injera. The Smiths are now growing other grains as well—millet, oats, and buckwheat—but the teff has become the farm’s featured crop.

A few years ago, Claire had the idea to create a teff-based granola. In its toasted form like this, the teff tastes particularly terrific! It’s also good for you—teff is very high in iron and has long been said to contribute to the success of Ethiopia’s many star runners (although I’d like to tell you that you can just eat some and start winning races, I will assure you that hard work, technique, and practice probably play a much bigger part). High in fiber, teff is being used to help prevent diabetes. It’s also high in vitamin C, calcium, and protein, and it’s gluten free.

For Claire Smith, this work is not just about business—it’s about a caring, constructive way of being in the world. Evidencing the power of purpose, Claire Smith says:

It’s handmade, and it’s delicious. But it’s not about granola. It’s about encouraging you to make those bold and brave decisions in your life. You are bold enough to make that leap. That’s our mission, that’s our story. I am daunted by that but it’s the right thing. That’s what drives us. We have to take the leaps to do what can lead to so many amazing things and the world would be robbed of what they have to offer.

Doing something different in this way isn’t easy. Erwin Chargaff wrote, “Life is the continual intervention of the inexplicable”—this past summer’s teff crop at the farm failed completely. They still have teff to use from last season so the Teffola itself is ok, but farming is never easy, and growing sustainable and special crops makes it even tougher. Claire and her family have, as they have for so many generations, pushed past the hardship. It’s been great tapping into her passion and expertise, and it sounds like she feels much the same:

I cannot emphasize enough what an honor and amazing learning experience this project to the Zingerman’s Teffola has been. Working with so many different areas of Zingerman’s has been an absolute blast! And the response from the community has been overwhelmingly positive and encouraging—truly a testament to how much work and care both teams put into the project.

From an eating standpoint, the Teffola tastes great. The toasted teff is blended with oats, almonds, pecans, Michigan maple syrup, dried cherries, ground cacao nibs from our friends at Askinosie chocolate, and a bit of vanilla. It has a terrific toasty aroma. I’ve been eating it mostly just out of hand, and it’s great with cold milk or yogurt. Sprinkle a bit on a scoop of the Creamery’s gelato. I also like it on toast, spread first with the savory almond butter we get from Georgia Grinders and then a generous handful of Teffola sprinkled on top; crunchy, nutty, delicious, and very good for you.