Super smooth, wonderfully delicious from the southern end of Korea 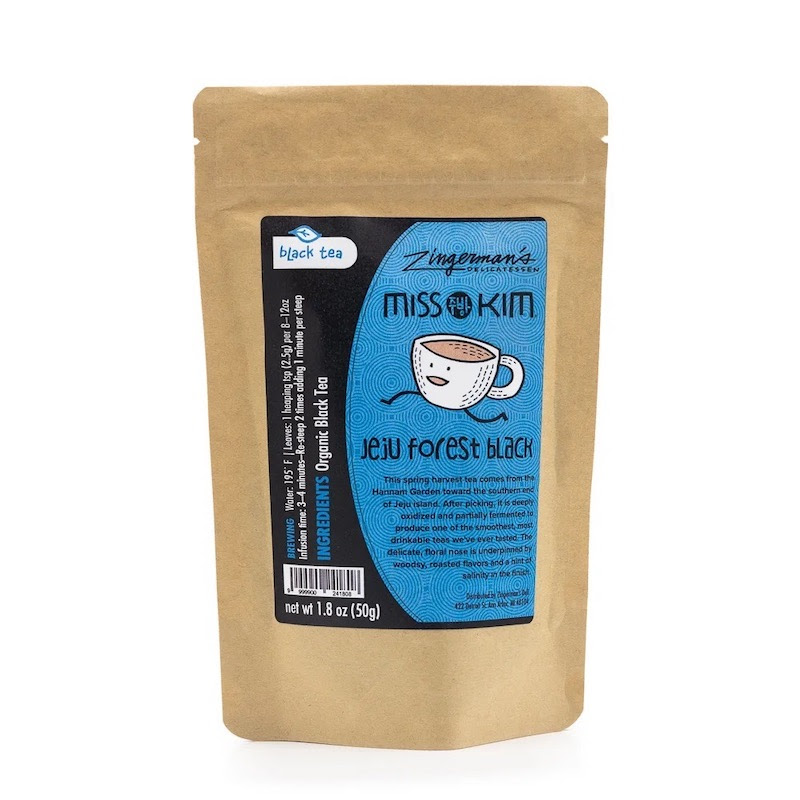 opened in 2016 as a proud part of the Zingerman’s Community of Businesses. Chef Ji Hye Kim grew up in Seoul, South Korea and is obsessed with ancient Korean culinary texts and the finer points of fermentation. Despite rumors of its eponymous origin, the name Miss Kim was chosen for its reference to the most recognizable Korean last name and our restaurant’s female chef-owner. The food is rooted in Korean tradition and adapted to showcase Michigan’s bountiful produce. Ji Hye has garnered a number of recognitions, including 2022 James Beard Award semifinalist for Outstanding Chef, Best New Chef in 2021 by Food & Wine Magazine, and 2020 James Beard Award semifinalist for Best Chef in the Great Lakes region.

Found on the tea shelves at the Deli and also on the Miss Kim menu, is this delicious black tea from Jeju Island off the south coast of the Korean mainland. Although most Americans won’t likely know it, the island is one of the most popular tourist destinations in Korea. Having read about it a bunch of late, I’m ready to go; it’s got the highest mountain in Korea, a five-mile long lava tube you can walk through; it’s famous for haenyeo, female divers who gather abalone and other seafood for up to five hours a day in the cold sea without scuba gear; and a world-famous, internationally-recognized ancient forest. Recently, the island was also listed as one of the new seven wonders of the natural world. If you have kids, there’s a teddy bear museum, and for folks like me, a tea museum too. Culinarily, Jeju has for centuries been famous for its “black pig,” a centuries-old breed of hog that has been called “the Kobe beef of pork.”

The tea comes to us from the folks at Osulloc Farms, the founder of which, Seonghwan Suh, made the advancement of Korean tea culture his life’s purpose. “We want to establish our traditional tea culture at any cost,” he said. Although Mr. Suh has passed on, the company’s commitment carries forward; their “beautiful dedication to spreading Korean tea culture continues by winning awards every year at world-famous prestigious tea competitions with sweat and passion to establish Korea’s tea culture.” The island’s volcanic soil contributes greatly to the uniqueness of the tea. To make it, young, spring-harvest tea leaves are oxidized and gently fermented using “bacteria extracted from traditional Korean soy sauce, or by aging it once again with natural ingredients in Jeju.”

I’ve been drinking the tea regularly for the past few months. It’s smooth, full flavored, nearly free of tannins. If you like black tea like I do, if you’ve been drinking “English Breakfast,” “Irish Breakfast,” or even high-quality Chinese Yunnan, you might well want to give this Korean tea a try. It’s a great match for the complex dishes that Ji Hye has so lovingly crafted. Come by Miss Kim this week, enjoy some of Ji Hye’s terrific traditional Korean cooking, and sip a bit of this lovely black tea at the same time. Or grab a bag at the Deli and enjoy it at home.