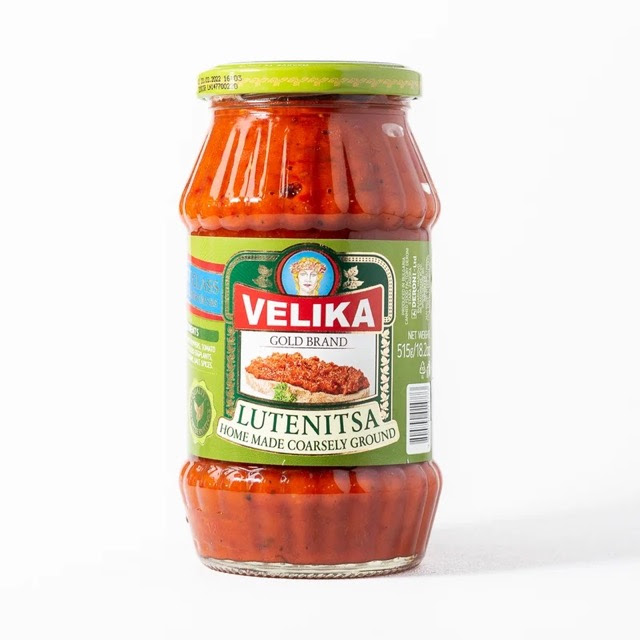 Red Pepper Sauce has been at the top of my personal consumption list ever since we first got in at the Deli nearly ten years ago now. While it was almost unheard of around here, in Bulgaria, lutenitsa is in pretty much every home. Every kid grows up with it, and almost everyone seems to love it. Most Bulgarian cooks will make their own lutenitsa, but a little over a decade ago we stumbled on the very good bottled lutenitsa made by a company called Deroni. Named after an ancient Thracian tribe who thrived in the area centuries ago, the company is clearly devoted to crafting super high-quality vegetable products. They do their own seed selection in-house, run their own nurseries, and farm all their own fields for growing. They’ve won multiple awards for their use of quality control systems and for the flavor of their products.

Like many “home-style” foods of this sort, for those who were raised with it, lutenitsa seems to be as much about emotion as it is about eating. Writer Rebecca Solnit says, appropriately and poetically, “The places in which any significant event occurred become embedded with some of that emotion, and to recover the memory of the place is to recover the emotion, and sometimes to revisit the place uncovers the emotion.” Lutenitsa proves the point. Every Bulgarian I’ve ever asked about it has lit up with excitement at its mere mention. One expat in Chicago was so excited she could barely contain herself. Another—an immigrant waiter in a small-town Pennsylvania restaurant—smiled broadly and said, “I haven’t heard that word in a long time.” Even Deroni’s promo materials make the same point—their lutenitsa, they assure us, will “wrap you with the warm embrace of your beloved grandmother, take you back in your smiling childhood and the forgotten smell of autumn, with the aroma of roasted peppers, coming from the gardens of every Bulgarian house.”

If you’re not yet familiar with it—which would be true of most Americans—lutenitsa is made from roasted eggplant, roasted peppers, and tomatoes, stewed and coarsely ground into a thick spreadable “sauce.” Akin to French ratatouille, Sicilian caponata, or Serbian ajvar, Bulgarians seemingly love to use lutenitsa on almost everything from sandwiches to snacks to sauces. Spread thickly onto a slice of that Sesame Semolina bread from the Bakehouse it’s amazing! Great with feta cheese or goat cheese. You can just eat a lot of it out of the jar—it’s hard to argue with the health of a snack that’s 99% just roasted vegetables. I like to add a few spoonfuls atop a green salad and then just mix it right in that way. Delicious on pasta (check out Rodger’s 4 ingredient magic meal formula), with fish, meat, or for sure in scrambled eggs. We’re good for a jar—or two—a week at our house!

If you want to do a little bit of a good culinary deed one of these days, drop off a jar at your neighbor’s house, accompanied by a nice handwritten note. As poet Katerina Stoykova-Klemer, who grew up in Burgas, Bulgaria, on the Black Sea, but has been living in Louisville (a few hours northeast of Trigg County) for a number of years now, writes,

You cannot love thy neighbor
without eating your vegetables.

And this time of year, lutenitsa is a wonderful way to do it.