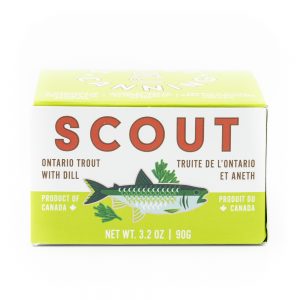 I’ve long been a huge fan of tinned fish, or what folks in Spain call conservas—tinned tuna, anchovies, mackerel, salmon, and sardines (about which I wrote a whole little hand sewn book, titled Sardines!), and I eat them all regularly at home. So, it’s no surprise that I’m so jazzed about the work of Charlotte Langley and the folks at a little company in Canada called Scout. We’ve started to get some intriguing new additions from them to add to our already very impressive collection of tinned fish on the shelves at the Deli and also at Zingerman’s Mail Order.

This first offering from Scout is a terrific tinned Ontario trout. Think sardines but in round cans, seasoned with dill weed and dill seed. The trout are fished from farms off the coast of Manitoulin Island—Manidoowaaling in the traditional Ojibwe language, means “cave of the spirit”—in Lake Huron. The fish are brought fresh from the farms to the small firm of Cole-Munro, started 25 years ago by a pair of friends, Geoff Cole and Todd Munro. Their plant is in the small town of St. Thomas, about half way between here and Toronto and a bit south of the city of London. They work with individual trout farmers around the island, using protocols that apply for fish farming much of what folks like Niman Ranch do for beef—they specify the feed (made from all wild caught, low-impact fish), the abundant ratio of water to fish, and the harvest methods, etc. to ensure the quality of the fish.

The company, Scout, was founded by Charlotte Langley, a chef with a long time love for tinned fish. She hails originally from Prince Edward Island in the Maritimes, the smallest province in Canada on the East Coast, jutting out in the Atlantic, a bit north of Nova Scotia and south of Newfoundland. Its capital is, conveniently for this new queen of Canadian convervas, called Charlottetown. Inhabited for centuries by the Miꞌkmaq (meaning, beautifully, “my friends”) people, for whom the name of the island is Epekwitk, meaning “cradled on the waves.” The first Europeans to arrive were French, who named it Île Saint-Jean. The island was part of Acadia, the home of the Cajuns, who were expelled by the British during the 7 Years War, from 1755 – 1764. About 80% of the 14,000 or so Acadian people were forced to flee, and thousands of them died—the rest hid and remained. Many ended up in Spanish Louisiana as well as into New Brunswick, Nova Scotia, Eastern Quebec, and northern Maine. During the American revolutionary war, a number of British loyalists fled to PEI. Charlottetown is where the meetings were held from the first week of September 1864 to form what became Canada, while the Civil War was still raging in the U.S. PEI itself didn’t join the confederation until the 1st of July, 1873. (Interestingly, in the years in between there were a number of leadership level conversations about having PEI become a part of the United States.)

Coming back to this terrific new tinned fish project, Langley says, “Our fishery partners are what make Scout’s product so unique and equally fresh and high quality seafood. They all meet the highest standard in sustainability, including reduced by catch and minimal ecosystem impact. We source from responsible fisheries that support their communities.” The trout are really terrific. Everything I love about great sardines but with tinned trout. You can do anything with these you would with sardines or canned tuna. I put some on a toasted caraway rye, spread first with the Creamery’s world class handmade cream cheese. Do the same on a sesame bagel or maybe better still on a Zinglish Muffin. Great on pasta with a bit of fresh spinach or broccoli rabe, topped with toasted bread crumbs. Pour the trout (straight out of the tin) over just-cooked top quality potatoes. Add to salads (check out this recipe for Trout Caesar from the Scout website), rice dishes, or mash with the cream cheese to make a spread. Super simple and really superb on all counts.