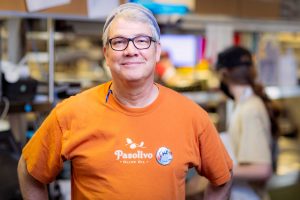 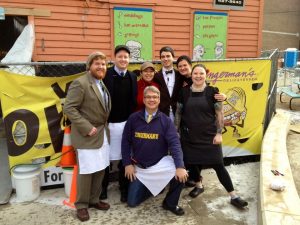 Rick has an impressively diverse resume. Before entering the glamorous hospitality industry he was a manicurist, a brick stacker, a shoe salesman, a bouncer, a DJ, an encyclopedia salesperson, a bartender, a hat maker, a ski instructor, a sign painter for a grocery store and he’s also mowed lawns at a cemetery. Once in hospitality he revived the iconic Joe & Nemo’s brand in Boston, built a top 10 US Steak house from the ground up (Abe & Louies) in the Back Bay & Boca. He’s helped folks from all around the country to focus on service & systems.His diverse experience has shaped him into a leader who’s passionate about helping others.

“I really enjoy making someone’s day better. Most of the time it’s not that difficult and I believe it has a pretty positive impact on folks,” Rick said. “I’m proud to be able to help folks when times are tough. We have so many friends in the community that can help in a variety of ways and situations, so when I can, I reach out and assist in making some positive connections.”

Today, he’s a managing partner of Zingerman’s Delicatessen, a position he’s held for 18 years, where he’s earned a reputation for supporting others when they need help.

“He’s always available by his personal phone number, any time of day or night, to help anyone with their life crises–whether it be a compassionate ear to listen to someone cry, a need for a lawyer or money for bail, an alarm that’s been tripped at the Deli, or a guest who needs to talk about how we can make it right. I’ve lost track of the number of people Rick has helped out at the Deli during the 7 years I’ve worked there, including myself,” Jennifer Hall, marketing manager at Zingerman’s Deli, said.

Rick’s Path to the Deli

Rick was born in St. Paul, Minnesota. He grew up on a farm in Hudson, Wisconsin where he lived from sixth grade through college. His family’s closest neighbors were miles away, and so too were two great ski areas.

“I used to get off the bus from school, put my books and stuff in a little shed we had at the top of a half a mile long driveway and then put my thumb out and hitchhike to go skiing most everyday,” Rick said. 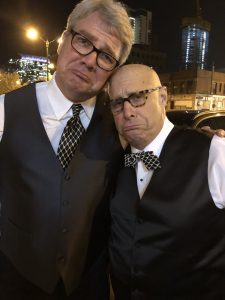 His time at the ski hill led to competing in Aerials and moguls all over the country in the 70’s & 80’s. Rick studied architectural engineering for about two years at The University of Wisconsin–River Falls, but left school to pursue a manager position in Ames, Iowa at the Cattleman’s Club.

“After having our second kid, my wife Lisa wanted to live closer to grandma and grandpa. She had moved around with me quite a bit in my career (Chicago, Philly, NYC, San Fran, and Boston, to name a few) so it was a pretty easy decision to agree on,” Rick said.

When an executive search specialist suggested he look into working with Zingerman’s, Rick didn’t know what to think.

“I went online to check them out and thought it was kind of a joke. Only cartoons and drawings of food… seemed weird to me at the time,” he said. “Not sure how I got connected with Ari online but we had some great correspondence about open book finance. I had implemented huddles in the company I was leaving. This is just before huddles started in the zcob. ” 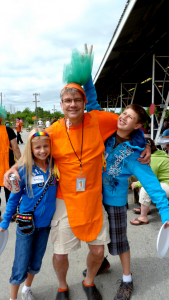 Since then, Rick has made a positive impact on the Deli as a leader.

“Doesn’t matter how long you’ve worked there–you need help and he’s there for you, connecting you with help or doing it himself. The saddest thing I’ve seen are staff who don’t believe his offers are genuine–that the “big boss” would really be OK with you calling his private cell phone when you need help. I would often follow up with staff after he talked to them, just to make sure they got the message. I’d say, “Did he give you his number?” “Yes” “Then he means for you to call it”,” Jennifer said.

Rick also has a passion for serving those in need outside the Deli.  He spent a number of years as a board member of Food Gatherers and today volunteers on their Finance Committee.

Rick at Work & at Home

Rick is passionate about teaching, specifically about visioning, and counts process engineering as one of the most valuable tools he’s acquired and tried to teach. Today, he’s focused on helping design a proprietary point-of-sale system for the entire Delicatessen. 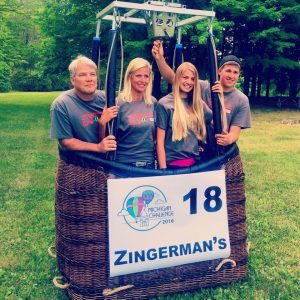 Rick and his family

“It’s different every day, it’s always challenging and usually high energy! I get to work with amazing people and get to meet folks from all parts of the United States and World…which is pretty cool when you think about it,” Rick said.

When he’s not at the Deli, Rick can be found spending as much time with his family as possible, and spending time outside fishing, boating and skiing. He says he also spends a lot of time talking about his kids – his son Joey is a hot air balloon pilot, and his daughter Lindsey has set the Grand Valley State University all-time school record in the heptathlon– twice!