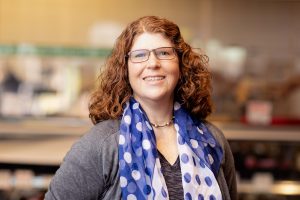 Food has always been a special part of Grace’s life. She says her dad was a great cook and her family loved going out to eat for special occasions, but it was a trip to New Orleans that sparked her curiosity of the culinary world when she was a young girl.

“My Uncle Jimmy was an interior designer in New Orleans and he helped design a restaurant called the Masthead. My family went to visit him and he took us to dinner there… We sat at the captains table and got special treatment… At the end of the dinner, the owner served us all a “new liquor” to taste that they’d just brought in – Frangelico (a hazelnut liquor). I was only 13 but back then you could drink with your parents if they allowed it. It was quite special and part of the reason I thought being in the restaurant industry would be such a glamorous profession. ” Grace said.

That night, a seed was planted. When it was time to pursue a career, Grace followed her New Orleans spark and went on to acquire a wealth of culinary and hospitality experience. Finally, in 2002, she joined Zingerman’s where her mind was opened to the traditions, methods and flavors of artisan food. 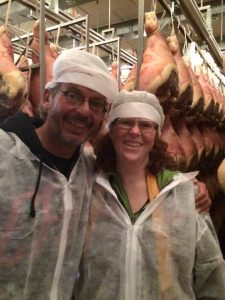 “I’ve learned more about food while working at Zingerman’s than anywhere else I’ve been,” Grace said. “Learning about and really understanding terroir, the care and time artisans spend growing raw ingredients, then transforming those raw ingredients into things like cheese or salami or bread, and the diversity of quality that comes from different productions, were things I understood only superficially before coming to Zingermans.”

Today, Grace is one of three managing partners at Zingerman’s Delicatessen, and one of the Deli’s resident artisan food experts with a special passion for vinegar. One of the favorite parts of her work is leading guided tastings, offering Deli guests the same special experience that gave her that first spark for the culinary world.

From Rural Ohio to a Resumé of Restaurants

Grace’s childhood mostly took place in rural, northeast Ohio, near one of the largest Amish communities in the US. She lived in East Claridon Township and says, “l’d love to meet anyone else who knows where that is!”

After graduating high school, Grace’s culinary studies and career led her across the country. Her first stop was studying culinary arts in upstate New York at Paul Smith’s College in the heart of the Adirondack mountains – the school housed 2,000 students on 40,000 acres of land.

“This was back in 1986-88. There were way less culinary schools then – only 6-10 in the US offered degrees for culinary. The ratio of men to women on campus was 4 to 1 and the closest McDonalds was a 35 minute drive,” Grace said.

Next, Grace completed an internship in Daphne, Alabama at the Marriott Grand Resort and went on to work for restaurant groups at locations across Maryland and Ohio. She eventually landed in Michigan when she joined C.A. Muer Corp., a well-known restaurant group, for a position at The Big Fish in Dearborn, Michigan, and found her way to Ann Arbor when the group promoted her to General Manager at the Gandy Dancer.

While she settled into her new town, Grace became a fan of the Deli. Eventually, an opportunity to join the Deli as retail manager popped up and she made the jump. Grace has described her role at Zingerman’s as, “the very best job in the food industry.” Grace later stepped up to join Zingerman’s as a managing partner at the Delicatessen.

Beyond her artisan food learnings, Grace credits Zingerman’s for making an impact on her career by offering management training on topics like supervising, handling confrontations respectfully and the power of writing a vision.

Grace’s leadership isn’t limited to her post at the Deli, she’s also a motivated leader in her community. She has supported, volunteered for, and served on the board for organizations like the Huron River Watershed Council, SafeHouse Center, Habitat for Humanity, Food Gatherers, Ozone House and Slow Food Huron Valley. 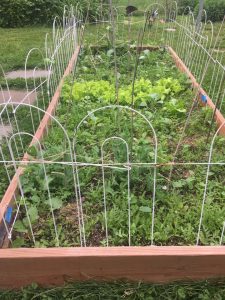 “I have lived in Ann Arbor for 20 years and I am still in love with this community…There are so many great people doing exceptional work to help each other here. Until you get involved and learn what is happening, you can be unaware of all the resources and assistance that are available. We all need a helping hand and together we can build an even better community,” Grace said.

When she’s not leading from her post at the Deli, or serving her community, you can find Grace gardening or cycling. Gardening, for Grace, is an extension of her passion for learning about food. From learning about how food grows and saving seeds, to watching the worms and the bees and the practice of harvesting and preserving, she sees nature as a wonderful teacher that only requires paying close attention.

Cycling is another way Grace practices paying attention. She says cycling is her favorite way to get around, “Every time I visit a new city if I can I find a way to go ride around the city on a bike — you can see so much more than in a car and travel farther than just walking.”

This attention to detail naturally spills over into hosting exceptional Deli tastings, dining experiences and special events. Grace hopes to see you at one of her upcoming tastings!

Explore the world of terroir and taste with Grace and other Deli experts by signing up for one of the Deli’s virtual or in person events. Browse the calendar and sign up here.