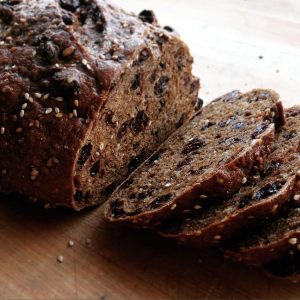 From one element of great eastern European Jewish culinary culture to another. Like a rare appearance of a musician with a strong cult following, Pumpernickel Raisin pops out of the Bakehouse ovens from time to time as a “Special Bake” – two-day appearances around the Zingerman’s Community of Businesses. For those in the know, Pumpernickel Raisin’s reappearance—even for two brief days—is cause for serious celebration.

Pumpernickel Raisin bread may not be prototypical Michigan baking, but it sure is good. One of my own favorite Bakehouse breads, it’s a little-known-in-the-Midwest specialty that long ago won over hearts and minds in New York City. Rye—and pumpernickel—were staples of Lower East Side Jewish eating back when folks of my chicken-soup-making grandmother’s generation were arriving en masse. (All of my ancestors had arrived by 1916. Jewish immigration was later slowed significantly by Federal restrictions during and after WWI.)

The story of Pumpernickel Raisin? Orwasher’s, the famous Manhattan bakery, says it was started at the end of WWII, but I’ve found a few references to Pumpernickel Raisin bread being sold at Ratner’s dairy restaurant on Delancey Street on the Lower East Side as early as 1905 (just a few years after Mr. Disderide built that Deli Building and the brick streets were making our neighborhood into a paragon of progressive development). I also found a funny service story about a New York Jewish waiter who worked at the Stage Deli, which, for some reason, refused to offer Pumpernickel Raisin bread. When customers would ask for it, the customer-focused server would slide into the kitchen and personally press raisins into slices of pumpernickel bread for them! That’s what we would call a serious “extra mile” here at Zingerman’s.

The Pumpernickel Raisin is particularly good spread with our amazing cream cheese from the Creamery. It’s wonderful paired with the Creamery’s Mini-Brie or Manchester. Pretty darned good with that great Koeze peanut butter we get from Grand Rapids or that Georgia Grinders almond butter I think is so amazing. Or just toasted with butter. Or even just ripped from the loaf and eaten as is! Stop by the Bakeshop or Deli to buy a few loaves. Or have some shipped to your in-laws in South Carolina!

> If you see the bread HERE, it means it’s available to order for PICKUP OR ANN ARBOR DELIVERY

If you don’t see the bread at that link, it means we don’t have a date for another Special Bake.  Send us an email at [email protected] and we’ll add you to the list of people to be notified when we have that next date!