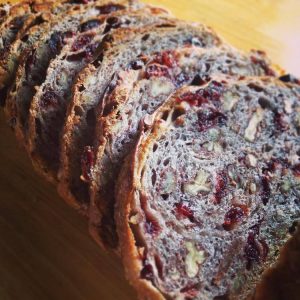 Brad Hedeman, skilled marketing manager at Mail Order and wonderful writer, says that a loaf of Cranberry Pecan Bread is the “kissing cousin to our extremely popular Pecan Raisin Bread.” Over half a pound of dried cranberries and pecans are packed into every loaf. It’s as dense and intense as our Pecan Raisin and you can use it in all the same ways. Toast and spread it with butter or Creamery Cream Cheese. Use it as a base for chicken salad sandwiches. We don’t add any sugar (there’s a small amount in the dried cranberries), shortening, or oil. Just unbleached and unbromated flour, filtered water, sea salt, pecans, and dried cranberries. When we hit the holidays, it’ll make a great gift, but in the meantime it’s probably just something folks ought to be buying for themselves. As with Chocolate Cherry bread, the quality of the bread itself is what actually makes the loaf so special. We use organic flour and it’s a naturally leavened dough with 18 hours of rise time. The result is chewy, dense, not super sweet, and terrifically tasty. 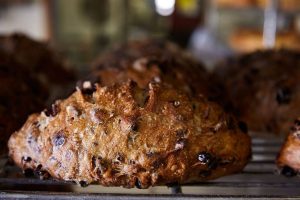 Cranberries, by the way, are native to both the Americas and Europe. Many believe that in New England they were introduced to Europeans by Algonquian people—the name for the berry in Narragansett is sasemineash. The Europeans called them cranberries, from the German, but also referred to them as bearberries. Given my attraction to alliteration I’m tempted to try to alter the name of this annual offering to Bearberry Bread. Whatever one calls it, we can probably come to consensus fairly quickly that it’s terrific.

We only get this bread November and December every year (and weekends in July), but it freezes really well and you’ll be glad to defrost a loaf in March or April, right along with the snow outside.