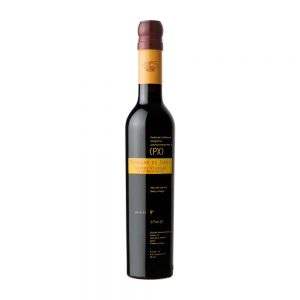 I keep thinking I’ll outgrow this sherry vinegar, imagining that one of these days my attention will be drawn elsewhere and that I’ll move on to marveling at some other of the many amazing offerings we have on the shelves at the Deli. But when all is said and done, the PX Sherry Vinegar from Spain remains something I’m inspired by every time I eat it.

The PX Vinegar comes to us from the folks at Sanchez Romate, just outside the town of Jerez. Although we’ve had it at Zingerman’s for many years now, when we first brought it here, it had hardly been seen outside its hometown. It was a rare specialty, closely held, primarily for family and friends. The vinegar was released to us around 25 years ago for the first time, in very limited quantities. We actually got the chance to sell this stuff years ago because one of the top folks at Sanchez Romate saw their vinegar mentioned in a copy of the little vinegar book we put out back in the ’90s (which later evolved into the vinegar chapter of Zingerman’s Guide to Good Eating). He wrote and offered us the chance to sell this amazing stuff for the first time in the States, and it’s been on our shelves ever since.

The house of Sanchez Romate was founded in 1781 by a well-known Jerez businessman and philanthropist, Don Juan Sánchez de la Torre. The Romate family came in later, by marriage. Its wine and vinegar have long been held in high regard—they have supplied prestigious folks, such as the British House of Lords, the Royal Family of Spain, and the Vatican. The family-owned firm has won numerous awards over the years for its sherry, vinegar, and Cardinal Mendoza brandy. It is made using the unique solera system that helps to make traditional sherry so special; a method of continuous blending (much like that done for traditional Balsamic) of younger vinegars with older ones. (See Zingerman’s Guide to Good Eating for more on this subject.) This limited release of PX vinegar comes from a solera started around 1920; the wine which was added to it is from a solera started at the turn of the last century. The PX Sherry Vinegar is made by adding a small quantity of very old (and famous) Pedro Ximenez sherry wine to already well-aged sherry vinegar. The resulting condiment is outstanding. It’s got a mouth filling richness that softens the acidity of the vinegar. Even a tiny sip can brighten my day or elevate the quality of most any meal. It is incredible in gazpacho, on salad, in seafood stews, tomato soup, or almost anything else. The other evening, just to test myself and make sure I wasn’t making all this up, I tried something super simple: ripe cherry tomatoes cut in half, sprinkled with a flake or two of Halen Môn sea salt and then a drop or two of this special vinegar on each half. Wow. Wonderful. All good ingredients. Fantastic flavor.

Clearly, I have yet to move on. And retasting reminds me that there’s no reason I would want to. It is incredible. We can all use a bit of beauty. As John O’Donohue declared, “The time is now ripe for beauty to surprise and liberate us.”

Shop vinegars at the Deli or online for pickup or local delivery.

Looking for some ideas for how to incorporate vinegar into your repertoire? Click here.