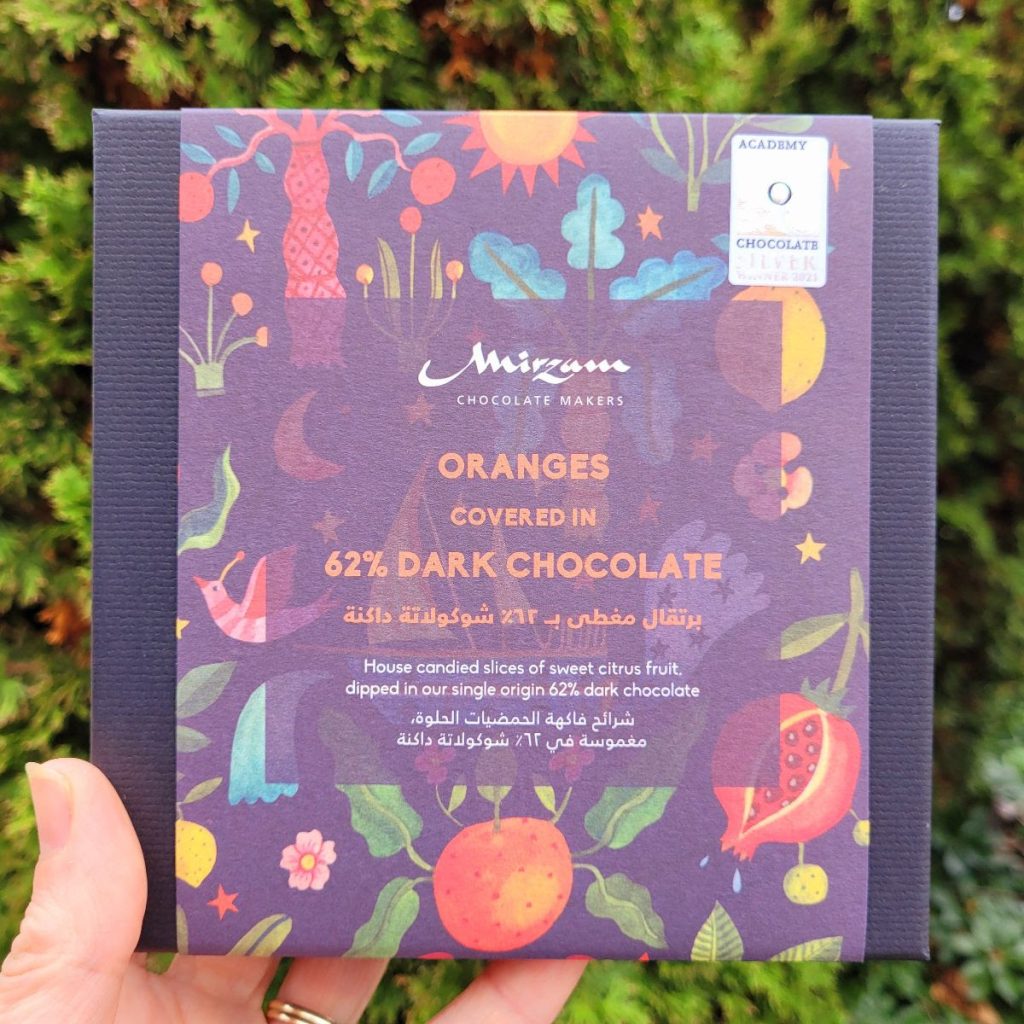 The Dark Chocolate Coated Oranges are a coming together of a series of historical rivers. Oranges came originally from China and made their way westwards. Chocolate started in Central and South America and was “discovered” by Spanish invaders who brought the cacao beans and a very rough textured form of chocolate back to Europe around 1500. For centuries, it was used mostly as a beverage. It gained popularity for eating after Rudolph Lindt invented what we know as “conching” to make for the smooth chocolate we now take mostly for granted. The idea of combining orange with chocolate showed up for sale for the first time in England in 1927 when McVities began marketing the still widely known Jaffa Cakes, and then again in 1932 Terry’s started selling the equally famous Chocolate Orange (chocolate wedges put together in the shape of an orange and wrapped in orange foil).

When I first heard about it a few years ago, the idea that world-class chocolate could be crafted in the blistering heat of the desert sands of Dubai sounded, shall we say, a bit dubious. My first impressions were totally incorrect. As our wonderful Montreal-based spice merchant Philippe de Vienne says in Secret #48 in Part 4 of the Guide to Good Leading series, “The impossible is possible if the circle of your vision is wide enough.” Mirzam is the product of a wide and inspiring vision—one that belongs to its founders and also to chief chocolate maker Kathy Johnston, to craft chocolate from start to finish in the desert. They sort each bag of cocoa beans by hand, roast, and then grind them with granite stones before mixing and conching. The finished chocolates—including these candied orange slices—have won a bunch of awards from the Academy of Chocolate in London. They’re a particular passion of chocolate maker Kathy Johnston, who wrote to me that, “Because of the slow cooking process we do in-house, using the whole fruit and all the juice to get a really bright orangey flavour without adding anything artificial. I love them!”

The Dark Chocolate Coated Oranges from Mirzam come in a beautiful box which makes them a great gift and an easy way to put something super tasty and sweet out on the table at your house. Don’t miss the lovely label by the Rumanian-born artist Aitch. And, of course, you don’t have to give the Dark Chocolate Coated Oranges as a gift to appreciate them—I just bought them to eat at home, and man, are they good! I actually finished the box while working on this piece and I’ll be heading over to buy another later today.

> ORANGE YOU EXCITED TO TRY THESE?