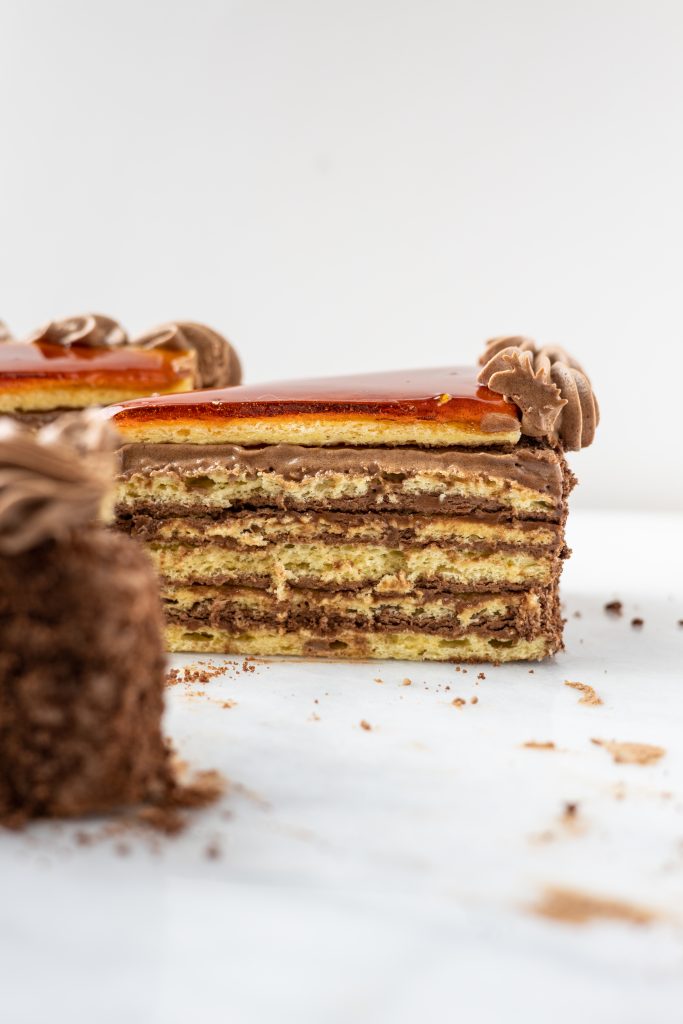 Dobos Torta is the creation of József Dobos who first developed it in his Budapest bakery back in 1884. Dobos’ family apparently had long roots in the food world, so it was probably not a shock when he opened his pastry shop in 1878 at the age of 29. It was the height of the Austro-Hungarian empire, an era in which the arts, architecture, music, and sciences all bloomed. Dobos was well-dressed, quite elegant looking with his pince-nez glasses and waistcoat, and was one of the best-known pastry chefs of that era, in what was likely the most pastry-loving country in Europe. Over the years, his specialty food shop, which sold everything from caviar to cake, became one of the best in Budapest.

For context, cakes and tortes were the “hot topic” of the culinary world in that era, and Dobos was determined to come up with one of his own. At the time he created the cake that would become his culinary claim to fame, Dobos would have been 37 and at the height of his career. He came up with the idea of a crisp caramel topping as a way to help keep the cake stay fresh in an era when refrigeration was rare. Chocolate would still have been a relative novelty for many in Europe. They would have heard of it, but outside the cities and the wealthier classes, they might not have ever tasted it. Buttercream was not yet well known, but Dobos had learned how to make it during a visit to France.

The Dobos Torta brought him a good deal of fame and also some fortune. In 1885, he showed off his new creation at the National General Exhibition—over 100 people staffed the pavilion and the Austrian Queen Elisabeth and Emperor Franz Joseph came by to sample the new creation. The National General Exhibition of Budapest in 1885 ran from May through October of that year and thousands of locals and travelers came to learn and, in this case, taste.

In 1896, there was an entire pavilion dedicated to the Dobos at the Millennium Exposition, and he soon became a supplier to the Royal Court. Long before UPS, FedEx, or DHL, Dobos built wooden boxes in which he started to ship his delicious delicately-layered torte to pastry eaters all over Europe. Shipping Dobos long-distance to Oxford is then well in sync with its 140-year-long tradition.

This past spring, in one of the seemingly small but ultimately significant quality improvements which has helped to make Zingerman’s what it is over the years, we began using the bean-to-bar 68% dark chocolate we’re getting from our friends at French Broad Chocolate down in Asheville. It contains Criollo and Trinitario cacao varietals which have been caringly cultivated for generations—each of which is considered among the rarest and finest cacao beans the world has to offer. (The French Broad chocolate has also made a big difference in the Townie Brownies, the Chocolate Cherry Bread, and Chocolate Challah too.) It’s more chocolatey, less sweet, and its finish is clean, lovely, and lively!

The recipe for the cake was kept close until the year Dobos decided to retire in 1906, when, demonstrating a spirit of generosity that we can all learn from, Dobos donated it to the Budapest Pastry and Honey-Bread Makers Guild in 1906 for others to make. His gift is still giving generously today—there’s likely not a single significant café in Budapest that doesn’t serve it. Dobos passed away in October of 1924. In fact, the weekend we ship the cake to Oxford will mark the 98th anniversary of his passing. I hope that we will do justice to Dobos’ generous and creative legacy.