A taste of the 12th century carefully crafted in 2021 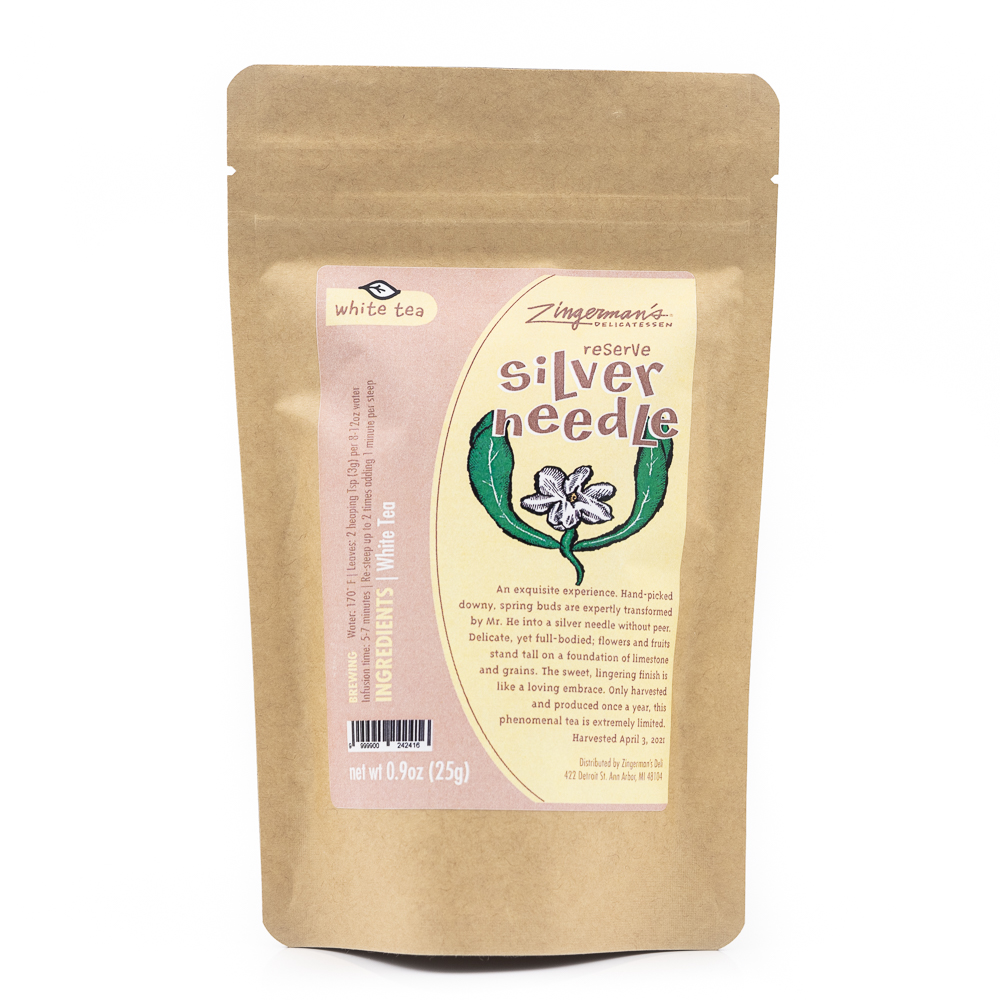 Another new limited edition tea has arrived at the Deli. In Chinese, the name is Yín Zhēn. The English translation is “Silver Needles.” What we have on hand is a small batch white tea, made by Mr. He, who the folks at our Montreal importer Camellia Sinensis call, “one of our favorite farmers.” Mr. He lives and grows in Jingling, southern Zhejiang province. As with the exceptionally rare delicious, Dragon Well we get from him, this tea is top notch—he is clearly a skilled tea producer and I feel fortunate to be able to buy such fine tea from him. I’m confident, now that I think about it, that if I get the chance to meet him and talk in person, I’m going to find out that there are dozens of small “extra” things that Mr. He does to make his tea so special. I’m pretty sure too that if he were to tell me about what he does, few if any of these little things would turn out to be deep trade secrets. Rather they will be, like Dr. Jay says, “sort of obvious” steps that, while they take a bit more work, and a bit more time, help turn what could be mundane into something marvelous. To wit, Mr. He and his team pick only whole undamaged and unopened buds, all by hand. For context, it takes about 40,000 buds to make a pound of this special tea!

White tea dates back about 1000 years, to the early part of the 12th century—it was mentioned by the Emperor Huizong in his “Treatise on Tea,” and the best of them were picked by hand, typically by girls wearing gloves, and then reserved for drinking at the royal courts where their soft delicate subtlety was highly prized. Unlike black teas, they aren’t oxidized. The name “Silver Needle” dates to the end of the 18th century, somewhere around the time the American colonies were gaining independence from Britain. The folks at Camellia Sinensis say that “its floral aspects and mild, silky liquor have won the hearts of tea enthusiasts worldwide.”

Silver Needle white tea doesn’t just taste good; it’s also good for you. It’s said to boost immune systems, help promote heart health, aid digestion, and perhaps most importantly in the rather hard times we’re working through, help you relax. The flavor hints of tropical fruit and flowers, maybe a subtle bit of mint, or rose petals. It’s best brewed for somewhere between five and seven minutes at fairly low, below-boiling, water temperatures—about 170°F to help keep from damaging the delicacy of the buds. There’s no bitterness at all and you can easily make multiple steeps from the same pot. If you have a tea loving friend, client, or family member, a bag of it will make a marvelous gift.

> PICK UP THIS SPECIAL TEA AT THE DELI!