Dressing up thousands of Reubens every week for nearly 40 years 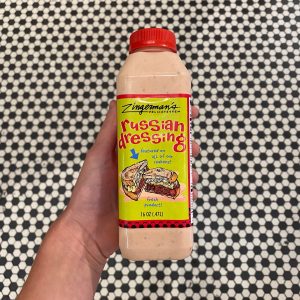 Our recent 40th anniversary has my mind drifting back now and again to the early days at the Deli, when the first of what have now been millions of Reubens were getting made on the grill. It would have been early in the winter of 1982. Interest rates were running nearly 20 percent. Michael Urquhart and Marillyn Hewson wrote, “The economy entered 1982 in a severe recession and labor market conditions deteriorated throughout the year. The unemployment rate . . . reached 10.8 percent at the end of 1982, higher than at any time in post-World War II history.” That was the highest until this year when that number was nearly doubled. The New York Times reported that in 1982, “The industrial Midwest was hardest hit, and the term ‘Rust Belt’ became ubiquitous.” While folks in Washington did what folks in Washington will do to deal with the situation, Paul and I were standing in the small kitchen at the corner of Detroit and Kingsley, in what was about to become Zingerman’s Delicatessen, working on a recipe for Russian dressing.

On March 15 of that year, 65 years to the day that the Tsar abdicated in revolutionary Russia, the first Zingerman’s Russian dressing got spread onto rye bread, which became the base for the first Rueben sandwich we ever made. We also spread it liberally on #1 (Who’s Greenberg Anyway?), #4 (the Dinty Moore) #10 (Nate’s Nosh, now a retired sandwich), the #13 (named for Paul’s grandfather, Sherman’s Sure Choice), and the #18 (Georgia Reuben). I have no idea how many zillions we’ve sold since. But all have had Russian dressing on them. To come up with the recipe, I did what I often do now—look through books. Since I’d studied Russian history, I dutifully started with one that seemed appropriate: The Russian Tea Room Cookbook, co-written by the well-known Nika Hazelton. It seemed logical. Russian dressing. Russian Tea Room. There was a recipe. I adapted it. We’re still using the same one today, 40 years later.

Funny thing I didn’t realize at the time is that Russian dressing is NOT from Russia. It likely dates to the American east coast, maybe even New Hampshire, back in the 1910s, around the time Emma Goldman’s Anarchism and Other Essays came out and Dori Sanders’ dad was dreaming of owning his own land in South Carolina. Despite the name, Russian Dressing is really an American invention. 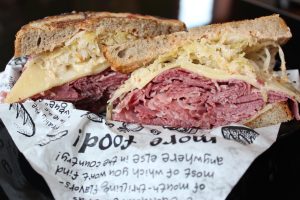 I wrote about the history of the Reuben fairly recently. One of the key ingredients then and now for the Russian Dressing was to buy what we thought was the best bottled mayonnaise we could get. (I know now that Southerners would argue for Duke’s, but at the time I’d never heard of it.) Around here, Hellmann’s was top drawer. In 1903, a year after Rocco Disderide built the building that now plays home to the Deli, Richard Hellmann immigrated to New York from Prussia. The next year he married Margaret Vossberg, whose parents owned a deli, and in the following year he opened his own place in which he sold his special mayonnaise. Most all mayo before that point was handmade at home. It quickly became popular and he started selling it in stores. In 1913, he built a factory and sold more still. A century and some later, we’re still using lots of it all over the ZCoB, much of it in the form of Russian Dressing.

You can order the Russian Dressing on sandwiches and salads at the Deli or buy it by the bottle to take home!