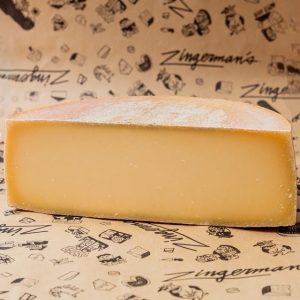 One of the tastiest cheeses we’ve got on hand right now comes from the small town of Platteville, Wisconsin. Chris Roelli, the man who makes Little Mountain, is a fourth generation Wisconsin cheesemaker. His great-grandfather, Adolph Roelli, came over from Switzerland in 1903. Other farmers in the area soon discovered that he knew how to make cheese and invited him into the local co-op to work the curd. His son Walter added milk hauling to the cheesemaking—at one time the family’s trucks were picking up milk from nearly 500 other farms. The Roelli’s success was challenged in the second half of the 20th century. The pressure for lower and lower prices made the Roelli’s commitment to quality unsustainable. The big buyers that dominated the market were offering so little that the Roellis finally gave in—they closed their cheese plant in May of 1991.

In the early 2000s, Chris, who was just out of school at the time, was determined to get back into it. Keeping his plans quietly to himself, he started to make a bit of cheese. First up was the now nationally renowned Dunbarton Blue. The Little Mountain came later—it’s Chris’ effort to honor his family history and return to the type of cheese that his great-grandfather would have learned to make back in Switzerland. It started in the style of a Swiss Appenzell, and with all of Chris Roelli’s recipe work, as he says, its flavor finished up somewhere between a Swiss Emmentaler and a Gruyère, and squarely in the family of mountain cheeses that its name would indicate. It’s got an amazingly wonderful flavor and aroma. Nutty, a nice nose, smooth, only the tiniest bit of sweetness, Little Mountain is meaty with a lovely long finish. I’ve been eating it out of hand (as with all good cheese, it’s best at room temperature). Super good for sandwiches, grated onto pasta or salad, or in scalloped potatoes. Great after dinner paired with dried apricots and red walnuts. Supplies are, as with so many of the special things we stock, very limited, so swing by the Deli soon and pick some up!