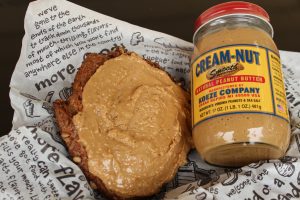 One of the best quality improvements we’ve ever done in the ZCoB came about 20 years ago when we made the move to upgrade our peanut butter by buying this artisan offering from the Koeze family in Grand Rapids. For our peanut buttery purposes, the Koeze story starts when Sibbele Koeze emigrated to America from the Netherlands in the 1880s. In 1910, the Koeze family started a produce business in Grand Rapids. Fifteen years later, they began making peanut butter, which means that in 2025 they’ll be marking a century of peanut-butter making.

Back at the time the Koeze family was getting going, peanut butter was still relatively new to the American public. The great agriculturalist and scientist George Washington Carver had been an advocate for peanuts in the late 19th century when the cotton crop failed in the South. John Harvey Kellogg is believed by some to have made the first peanut butter in his Battle Creek sanitorium. Peanut butter was formally introduced for the first time in 1904, two years after the Deli’s building was built (it’s not hard to imagine the Disderides putting jars of the “novelty” on their shelves for the first time!). As it has been throughout the decades, the Koeze’s Cream-Nut Peanut Butter is made only from the family’s special source of Virginia peanuts, along with a touch of sea salt. Super simple, incredibly tasty, and still tasting as it would have back in 1925. Back around the time we started buying it, food critic Florence Fabricant was singing Koeze Peanut Butter’s praises in the New York Times, writing, “Coarsely ground in small batches and lightly seasoned with sea salt, it is neither creamy nor chunky but totally irresistible.”

The Koeze Peanut Butter is terrific, of course, for peanut butter and jelly sandwiches. You can also use it to a good end in cooking as well as a base for sauces and dressings. Personally, I like the Koeze Cream-Nut Peanut Butter on toast, drizzled first with some good olive oil, then sprinkled with a bit of freshly ground black pepper. Great in one of those Peanut Butter, Bacon, and Banana sandwiches Elvis Presley made famous. If you’re not into cooking at home, come get a peanut butter and jelly sandwich at the Deli.

When tensions are high, we can all use a bit of comfort, and for many, the Koeze Peanut Butter can do just that. Swing by and grab a sandwich or buy a jar, or order online as well. The hardest decision will be–smooth or crunchy? Pop open that jar, take a deep breath, appreciate the aroma, and enjoy one of the best versions of this American classic you can find.