A spicy new addition made from a very special pepper 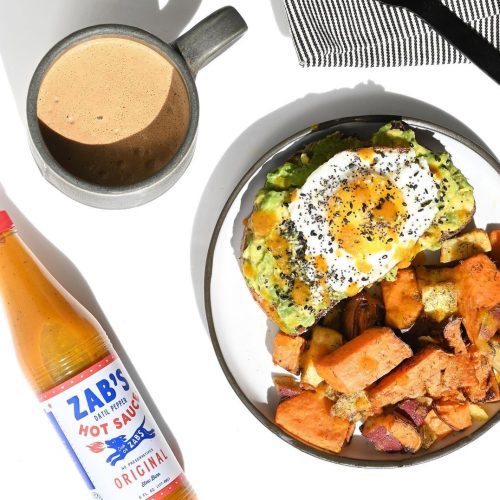 The two key points for me about Zab’s Hot Sauce are a) It tastes terrific, and b) It has a drawing of a cute dog on its lovely label. I’m biased in favor of dogs, and the cute, fire-breathing canine on the cover label made me smile too—but it’s the flavor that really got me wanting to write about it here. Swing by the Deli soon and grab a bottle or two. We have some at our house and Tammie and I have been adding a few splashes to pretty much everything to test it out. In the last few days alone, Zab’s has been adding some zip and a bit of zing to avocado, tuna, fried potatoes, and eggs.

While Zab’s is new, the Datil Pepper and the idea of cooking with it are anything but. They’ve been a staple around the area of St. Augustine, Florida for a couple hundred years. The Datil’s history—like all origin stories, I’ve come to understand—is a bit controversial. Some sources say it came with enslaved Africans. Others offer that it arrived with Spanish colonists coming from the island of Menorca (home of the marvelous Menorca cheese). Other sources still say it showed up from Cuba (or some say Chile) with a jam maker by the name of Valls. However it got there, the Datil pepper remains unique to the area. Daniel Cantliffe, a professor of Horticultural Sciences, says, “We have looked around the planet; we can’t find it anywhere else.”

The Zab’s sauces are fruity, hot, and have a happy bit of spice. The Original is the hotter of the two, but it’s not so hot that it’ll blow your head off! Made with vinegar, carrots, Datil peppers, and spices, most of which are organic, it’s my favorite of the two. The St. Augustine-style is a bit sweeter and still nicely spicy. It’s made with tomatoes, pineapple juice, spices, and vinegar, and again, most are organic. Both sauces taste terrific on pretty much everything from tacos to tuna salad to tomato soup, fried chicken to fresh fish, and everything in between!