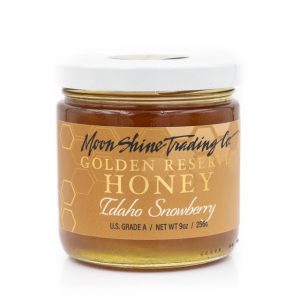 Snowberry honey is something of a secret in most of the world, but it’s been one of my favorites for a good while now! If you’ve never had it, swing by the Deli and buy a jar soon! It’s an eminently affordable way to enhance your eating and brighten your day!

The Snowberry plant (also known as Waxberry or Ghost Berry) is native to China, as well as to Tasmania and New Zealand. In North America it’s now found in the forests of the Pacific Northwest—this Snowberry Honey comes to us from Idaho from Moon Shine Trading Company! Snowberry bushes are generally about two to three feet tall, with bell-shaped, white blossoms that appear each spring, followed late in the summer by clusters of the snow-white berries that give the plant its name. The plants are resilient, and in an amazing reproductive process, when the berry-laden branches droop the ground, new roots start to form. The berries are generally considered poisonous for people, but many animals eat them; they provide good food in the winter. The stems are traditionally boiled into a tea that’s used to treat any number ailments, and Native American tribes in the region would traditionally crush the berries and use them as a balm for skin ailments.

While Snowberry Honey may seem obscure, it’s outstanding. A bit bitter, only subtly sweet, with a touch of butterscotch, a hint of herbiness that in a subtle way strikes me like the bitterness of fresh rosemary. Long, lovely clean finish. The texture is, as I like it best, thick and granular, typical of late season honeys like this. Spread it on toast or a toasted and buttered Zing-lish Muffin. Eat it by the spoonful (my preferred method). Put it in blintzes or make some Snowberry Honey ice cream. Great with cheese.