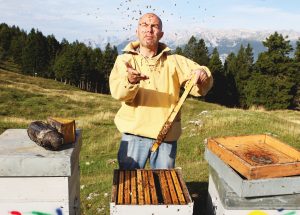 The Italian culinary journal Gambero Rosso wrote: “Andrea Paternoster, the innovative beekeeper who revolutionized the honey sector in Italy with his Mieli Thun honeys, died today, April 18, 2021.” Andrea was killed, tragically, at the age of 54, in an auto accident, barely over half way through what should have been his remarkable life. Andrea and I met many years ago when I visited the Alto Adige region in northern Italy. The beauty, complexity, and variety of the great artisan honeys Andrea and his team at Mieli Thun have made available are, for most of the world’s consumers, beyond belief. If you taste them, they just might start to change your beliefs about honey.

Once you’ve tasted them, you certainly wouldn’t be the first person whose understanding of honey was altered by Andrea. He was said to bring an “ambassador-like zeal” to his work. Here’s what I wrote 15 years ago after Andrea and I met for the first time:

I was on a trip to the region to learn about its cheeses and cured ham, but someone had offered me a chance to try this guy’s regional varietal honeys. The only catch was I had to get to the market by six in the morning in order to meet him and still make the bus that was taking us up to visit cheesemakers in the mountains that morning! It’s not like I enjoy getting up at five in the morning but hey, how often do you get to taste 20 varietal honeys in the mountains of northeast Italy.

Needless to say, I decided to set my alarm for 5 AM. and make my way to the meeting. I’m glad I did. The honeys were truly terrific. Many were varieties I’d never had before. Honey from wild carrot blossoms. From dandelion. Mountain rhododendron. Ivy! The list was amazing. So were the flavors—every one. The man behind Mieli Thun is Andrea Paternoster. He’s third generation in the bee business, and he understands the bees and their natural cycles in a way that few others can claim.

Andrea has an enormous passion for preserving the wonders of old time honeys. Over the years he’s expanded his scope to have honeys from all over Italy. He’s dedicated to making high quality honey—traditional honey gathered by beekeepers who diligently move their hives as the different blossoms open in different places—into an everyday food! Instead of suffering through the one dimensionally sweet flavor of commercial processed honeys now sold in every supermarket in the country, we get the excellent, the exotic, the inspirational. All you have to do is open the jar, stick in a spoon, and enjoy!

Although he began his beekeeping on his family farm, Andrea gradually became a traveling beekeeper. From his base near the mountain town of Thun, he and his team would drive across Italy, shifting the hives every few weeks to match whatever was best and in bloom. While eating the honey is easy, making it happen is hard work. Miele Thun has about 1500 hives, with 50,000 to 70,000 bees in each. The team drives about 4500 miles a year shifting the hives from spot to spot, and typically works 12- to 14-hour days during the season. The bees can only be moved at night—always gently and as quietly as possible—so that the hives can be set up again in their new spot by about 5 AM, before the bees wake up with the morning sun. “I’m a shepherd,” Andrea said. “I move swarms of bees like a flock of sheep. I’m always looking for the best flowers for the bees, just like a shepherd looks for the best grasses for his animals.” Andrea was a friend to the bees in practice as well as in spirit. He became well known for playing with the bees in the field the way kids play.

When he would teach at Slow Food University, Andrea started his instruction by saying:

My name is Andrea. I am a beekeeper… [My] goal is to change your life… 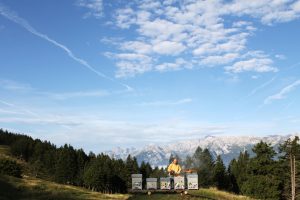 Andrea worked hard to change the beliefs of anyone who would listen. “When you see honey on a shelf labelled ‘honey’ but it always looks the same, ask yourself: where is the catch? Honey does not exist in just one way, one colour. There are many kinds of honey with many different colours.” He was determined to spread the good word and he charged everyone he spoke with to take up the cause. “Please,” he would say, “become ambassadors of this message.”

Grief expert David Kessler says that, “Death ends a life, but not our relationship, our love, or our hope.” Last week, the team at Mieli Thun wrote, “We are all certain that Andrea is and will be in every bee around us, in every element of nature and in every vital breath that animates this world.” Andrea would say, “At the end of each tasting, I always leave an empty glass representing next year’s honey. Because, for me, honey is discovery.” I grew up as a kid getting taught to always leave an empty chair and a full glass of wine at the Passover seder in case the prophet Elijah showed up. I’ve long since left that belief behind, but maybe now I’ll go back to putting an empty glass on the counter—for the honey crops to come and in honor of Andrea. I believe that his colleagues will keep Mieli Thun going forward, but Andrea’s passion and his spirit will be deeply missed. I’ve advocated for artisan honey for many years now; in Andrea’s honor I will now take up the cause with even more vigor.

We have eight of the Mieli Thun honeys on hand at the Deli right now. I love them all.

All are amazing. Spoon some onto one of the City Goats and you’ll have a simple “cheesecake” that someone in the countryside of France or Italy might have put together in the fields or forests five hundred years or so ago. Use it, as Andrea often advocated, to rub into meat and allow it to marinate for a few hours before cooking. Add it to a salad dressing—each honey brings different flavors. Whatever you do, work some of this wonderful honey into your daily routines. Your life will be richer for it. As Andrea asked us all to do: “Become ambassadors of this message.” Study, taste, learn, appreciate, share. Because as Andrea said, “Honey is discovery.”