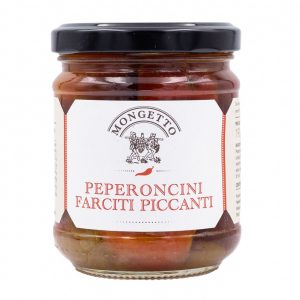 These amazing anchovy stuffed peppers are, without hesitation, truly one of the most terrific things I’ve ever eaten.

Food writer Faith Willinger refers to these as “red truffles,” which I think is an appropriate description—they’re almost as hard to find, similarly shaped, and not inexpensive. The folks at Il Mongetto in the Piedmont region make them by hand, placing anchovies and capers into incredible, small, round, softly spicy red Piemontese cherry peppers, which are then bathed in luxuriously rich extra virgin olive oil from the estate of Alfredo Mancianti down in Umbria. You simply eat them, one at a time as an aperitif, or if you’re dining casually, alone, you could make them into your main course right of the jar. Add a green salad and a slice of toasted Paesano bread to dip gently into the exceptional extra virgin olive oil in which they’re packed—enhanced by the essence of the anchovy—and you have a world class meal! In fact, the oil from the jar would make a delicious salad dressing.

Il Mongetto is located in Vignale Monferrato, a tiny hamlet in the hills. On a clear day, you can see all the way from Monferrato down to the sea to the south, and also on up to the majestic mountains to the north. Roberto Santopietro, the man behind Il Mongetto, was born in Milan, but moved out to the countryside to work on the family farm as a young man in the mid-70s. After a few years of farming, his father sent him to Genoa to work with the writer, gastronome, and anarchist (among other things, he translated the work of Proudhon into Italian) Luigi Veronelli. Veronelli was a pioneer in high quality food and wine in the region, of whom winemaker Bruno Giaocosa said,

He was the first person to teach us that a great wine was born in the vineyards. He was the first to point out the absolute necessity of carefully selecting grapes in the vineyards, the importance of terroir… He believed Italian wine could be brought to exceptional levels if we worked closely with the earth. Back in the 60s and 70s, no one thought like this. He truly was a pioneer.

His influence on the young Santopietro was significant—Roberto was inspired to go back to Monferrato and honor the culinary traditions of the region. In the early 1980s, Roberto stumbled upon a book of his Nonna’s favorite recipes and began making jams, sauces, and preserved vegetables. “This goodness all came from the family recipes of my grandmother Palmira,” Roberto says. “She was a mother of 10 children, used to always having an abundant and lasting pantry, who collected all the preparations in a black notebook.” In that notebook are the “secrets” of Il Mongetto’s magic. Il Mongetto still works today, Roberto says, “With the same enthusiasm and the same fidelity to the tradition of the past.”

With that in mind, every ingredient in an Il Mongetto product is exceptional. To source anchovies, Roberto travels each year to Barcelona to select the fisherman Il Mongetto will work with. A year later they get the anchovies, traditionally cured for nearly twelve months, packed in sea salt. Anchovies may seem an odd tradition for a mountain region removed as it is from the sea, and yet they show up in dozens of different local recipes. In fact, the signature dish of the region is Bagna Cauda—a warm bath of anchovies, garlic, and olive oil in which vegetables are dipped. Writer Robyn Eckhardt explains:

Given Piemonte’s landlocked position, the prominent place of anchovies in its pantry is a bit of an oddity. Acciughe salate were likely introduced to the region via ancient trade routes that connected it with salt pans in Aigues Mortes, on Provence’s southern coast. At the time salt was a precious commodity, and salt traders traveling the routes are believed to have concealed their cargo from tax collectors by topping up baskets of salt with a more paltry article of trade: salted anchovies. Eventually trade in these fish became a profitable business in itself. Demand for salted anchovies in Piemonte even gave rise to off-season opportunities for farmers in the region’s southern Alpine valleys, who bought anchovies in Liguria and returned to Piemonte to spend winters as itinerant sellers.

We also get a series of great bottled pasta sauces and other condiments from Il Mongetto and all are excellent. Roberto says, “Mongetto is a way of life, which I share with my wife Margherita and with all those who enthusiastically participate in projects linked to the territory, people, family, and friends. Mongetto tells the flavors of Monferrato, its traditions, and its trade… (essential to the) survival of the peasant family.” When you savor the stories—both Roberto’s personal journey and the way anchovies became ensconced in a region they don’t come from—these “Red Truffles” taste, I think, even more special still. Pop one in your mouth and chew slowly. Savor the layers of flavors as they unfold. Sweetness first, then a lovely mild spiciness, all enhanced by the saltiness of the capers and anchovies. Appreciate the moment and the many years of hard, caring work that went into making it happen. It is the culture of the region brought alive, all in this small, wonderful jar!