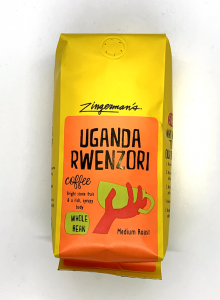 While so much has been turned topsy turvy over the last year, one thing that has provided comfort and consistency throughout has been the quality of the beans at Zingerman’s Coffee Company. In fact, I would venture to say, through all the ups and down of the last twelve months, the coffee has actually gotten better. The April 2021 Coffee of the Month—from the mountains of southwest Uganda—is pretty darned amazing.

Coffee originates to the north of Uganda in Ethiopia—it’s grown wild there for far longer than humans have been consuming it. Coffee is a relatively recent arrival in Uganda, essentially part of the same Industrial Age push to identify export crops that brought coffee to Central and South America. Today Uganda produces about 4% of the world’s coffee, tiny by the standards of say Brazil, but about four times where it was in the early years of the 20th century.

The Rwenzori mountains where these beans are grown are near the country’s western border with the Democratic Republic of the Congo, and to the north of the Rwandan frontier. You’ll see the mountains on the map about halfway between Lake Stanley and Lake Edward, to the west of Lake Victoria (Africa’s largest lake). The mountains range up to 16,000 feet, and the coffee is grown in the lower (but still high) altitudes in the shade of banana trees, which protect the delicate coffee cherries from “burning” in the sun. The coffee is a “natural process”—dried in the sun—which concentrates the sweetness and the flavor in a way that I love.

Steve Mangigian, long time managing partner at the Coffee Company, says, “We immediately loved the fruitiness of this coffee. That’s what caught my attention. It exemplifies the characteristics of great East African coffee.” Juicy peach notes, maybe you could say even a bit of nectarine. It’s nicely chocolatey and terrifically tasty. It’s very good straight out of the Fetco pots at the Coffee Company, Roadhouse, and Deli. If you’re at the Coffee Company it is particularly chocolatey in a pourover and delicately delicious brewed in a syphon pot. Add a piece of the Bakehouse’s marvelous Mandelbread or a Big O Oatmeal Raisin cookie and bring a bit of beauty to your day!