A small bit of saline loveliness from the South Coast 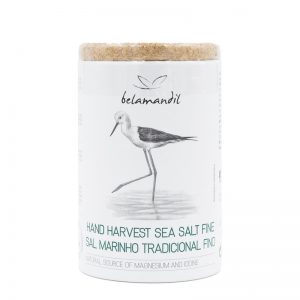 It’s over 20 years ago that I first visited the south of Portugal. I love the sun and I love the beach. It’s a beautiful place. In a sense though, what’s stayed with me most, is this wonderful traditional sea salt that we’ve been bringing to the Deli for nearly two decades now.

The company from whom we get it is known as Necton, led by João Navalho, a Mozambique-born Portuguese student of marine biology. He and a friend, Vitor Verdelho, got a grant to work with the country’s natural resources—and set out to see what they could do on 20 hectares of protected land in the National Park of Ria Formosa down in the Algarve. To this day, they’re producing an exceptionally delicate and delicious sea salt. They’ve gone to great lengths to care for the environment, for the traditions of the Portuguese salt harvesting culture, and the sea. They adamantly refuse to use any anti-caking agents or other additives. I’ve been a big fan of the salt ever since I first visited in the late 90s back when João and Vitor were just getting going.

The Algarve has been producing and exporting salt since at least the 11th century. At times, Portuguese salt has been called the best in Europe, but in the past century or so the area’s salt production fell prey to the efficiencies of the modern salt makers who switched to lower-cost mechanical drying and industrial production. João and his peers have worked with an older marnoto—those who tend the saltpans—to relearn and then revive, the Portuguese salt traditions of centuries past. They located and restored the old wooden hand rakes and other tools used in production. Their work has helped restore the local ecosystem, aiding in keeping the area’s outstanding birds—egrets, herons, and others—alive and active in the area. They’re focused on staying small, what author Bo Burlingham might call a “Small Giant” in the salt world! “We don’t want to be the salt kings,” João says. They just want to do the right thing. Necton has, over all these years, stayed very progressive in their business practices—staff ownership, ecological focus, profit sharing, etc.

Despite all those positives, getting this very good salt onto the market was no mean feat. Portuguese law, leaning heavily towards industrial salt use, essentially forbade the sale of pure, traditionally made sea salt. Only extensive efforts with government and EU offices got them through this industrially-oriented roadblock. We’re happy to be getting it still all these years later!

As with the French Fleur de Sel, their Flor de Sal (the one in the glass jar) is taken only from the first formations of sea salt across the top of the salt pans; it’s quite white in color, very gentle, and sweet in flavor. In centuries past, the Flor de Sal was the salt taken by the salt workers themselves for their own consumption at home. It’s long been referred to by locals as “the cream of the salt,” since it was the prime product skimmed from the top just as dairy farmers skimmed the richest cream off the top of the milk in the morning. It accounts for no more than 15 percent of total production. Like the cream, the Flor de Sal must be gathered daily.

In comparison to the French Fleur de Sel, the Portuguese product is perhaps a bit lighter, the flakes a touch smaller, and not as overtly identifiable in snowflake shape. Both are a delicate and delicious, traditional saline specialty. It’s exceptionally sweet, and it really does have a hint of violets in the aroma. It’s a wonderful way to make almost any dish remarkable. Sprinkle it onto toast, roasted vegetables when you bring them to the table, cut tomatoes when we reach that time of year. Because of the quality of the salt and the packaging both, it’s a terrific gift for anyone who loves good food.

Necton also harvests the “standard’’ sea salt from below the Flor de Sal every two to three weeks during the summer salt season. (Commercially-produced sea salt is allowed to build up all summer and taken off only once at the end of the season, the baked, rather than sun dried). Unlike the French Sel Gris (gray salt), they’re careful NOT to rake up sediment from the bottom of the pools. As a result, the salt is much whiter than its French counterpart, more akin to the Flor de Sal. (Most industrial sea salt is bleached to make it white—in Necton’s case, it’s a completely natural offering.) Wonderful for all your cooking needs.