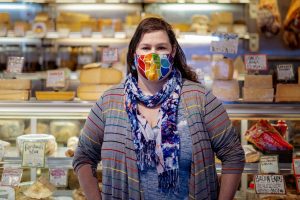 Tessie Ives Wilson grew up in Lennon, MI, a one-stoplight town (village, to be precise) just over a dozen miles west of Flint. It has a population of 511, and, during Tessie’s childhood years, featured a small family-owned grocery store, two bars, a post office, and a pizza parlor/video store/ice cream shop combo. Lest you think this translated into a sleepy childhood experience, note that she made her own set of throwing knives for fun when she was 10 years old (not to worry, there was adult supervision of the project!).

After graduating high school, she moved in with her then boyfriend (now husband) who grew up in Ypsilanti, where she had just transferred for school at Eastern Michigan University. Tessie studied instrumental (trombone) and vocal music with a goal of becoming a music teacher for middle school students, but eventually became disillusioned with the education system and never finished her degree, but she learned a lot about what she liked (and didn’t) about teaching in the process.

At this point, food was only something that really played a role in special occasions, like holidays, but other than that it was pretty typical suburban fare of the 80s and 90s. One food memory that does stand out though is annual pierogi-making with her dad’s family for Good Friday:

“Having all of my aunts (my dad has 6 sisters!) and my grandma in the kitchen I remember being 19 and finally being trusted with making the dough. We always started the little kids out with stuffing, then checking the seal, but it wasn’t until you were trusted with making the dough that you knew you were considered one of the “adults.” We usually make 500 or so starting that morning and ending with family dinner (the massive amount is so that everyone has a few dozen for their freezers as well!).”

The Road to Zing

Tessie applied for a seasonal position at Zingerman’s Mail Order with the goal of earning a little additional holiday cash, but quickly fell in love with the culture and the people. When she worked in corporate fast-fashion jobs prior to coming to Zingerman’s there was never that sense of team or joy in the work that she’d get (and still does!) when she’d come to work. So, after two seasons as holiday call center staff, when a “regular” position at Zingerman’s Deli became available, she jumped at it and worked in retail sales for 6 years.

She then worked at Zingerman’s Creamery for 6 years, where she tackled just about every position in the business at some point, aside from accountant or managing partner. During that time she became an American Cheese Society Certified Cheese Professional and developed and led the Creamery’s tasting program.

Last year, mid-pandemic, Tessie returned to the Deli where she’s heading up our tastings and events. One of the aspects she most loves about these roles is making the foods the Deli carries more accessible for guests. For a time, she had the nickname “Enabler-in-Chief,” because when she talked about how she was using the ingredients at home, people could really see themselves using that trick or making that dish in their own kitchen, too. Her biggest piece of advice is, “Taste everything at least once, and know the context that it’s traditionally used for before deciding you don’t like it!”

Tessie’s very favorite item to introduce guests to is… cream cheese! When she worked at the Creamery, it was one of the things that she would help make, which gave her a different level of appreciation for something that seems so simple. As she explains, “The care and hands-on nature of making milk and cream into cheese is really hard, physical work and it’s really easy to make the mistake of assuming something is simple when there aren’t a lot of ingredients that go into a product, but the reality is that there also isn’t anything to hide behind so you have to do it all really well!”

If she’s choosing an entire meal though, her favorite is a plate of salads from the Deli case in mid- to late-August (in non-COVID times). That’s the height of summer produce season for Michigan, so all kinds of fresh veggies from the nearby farmers market are turned into delicious dishes that change every few days.

For those who can’t stray from the Deli’s extensive sandwich menu, Tessie has actually had a sandwich named after her! Angus & Tessie’s Skipanon Sing-A-Long isn’t on the menu right now, but you can own your very own hand-painted poster of it. If she was creating her own dream sandwich sensation, it would include mixed greens, fresh tomato (only in season), red onion, fresh goat cheese, jamón serrano, and balsamic vinaigrette on a Zingerman’s Bakehouse French Baguette.

Tessie has two active and adorable kids—six-year-old Angus and 8-month-old Duncan—that occupy a lot of her time when she’s not at work. With the little spare time that she has to herself, she enjoys fiber crafting, specifically knitting and spinning her own yarn. And, perhaps not surprisingly, she also loves to cook.

Tessie is one of those people who is always playing with a new recipe or baking—a love that she’s cultivated and expanded on during her time at Zingerman’s for sure! Early on when working at the Deli, more experienced employees taught her the standard ratio for making a vinaigrette: 2 parts vinegar, 1 part binder (preserves, mustard, nut butter, etc), and 3 parts olive oil. Now, she makes her own at least once a week. She can make a vinaigrette out of just about anything in her pantry, but lately the 3-Year Balsamic and the Sour Cherry Preserves have been in pretty heavy rotation.

Take a peek in Tessie’s pantry and you’re likely to find a few other standards as well. In her own words, here’s why she always keeps these items on hand:

Meet up with Tessie or other Deli experts at one our virtual or in person events. Browse the calendar and sign up here.