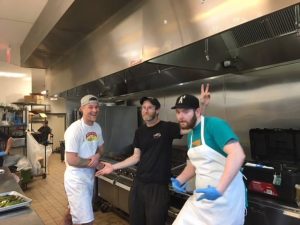 Chef Bill Wallo clearly remembers the first time he visited Zingerman’s Deli. It was 1992, and he was just amazed when he walked in—someone was waiting there with paper and pencil to take his order! The first items he tried were cheese and olives from the retail counter, but he certainly hadn’t stopped tasting Deli delicacies since. Bill started working at the Deli in 2001, and deeply appreciates the access he has to world-class food products. He doesn’t take it for granted, because that helps him keep learning and experimenting, which is especially helpful for his role as a chef with Zingerman’s Catering & Events.

Working in catering means that the kitchen is his office (Bill doesn’t have a desk or a laptop!) and he gets to do what he’s best at everyday when he walks into work. That doesn’t just mean cooking though. Making hundreds of portions of a dish is very different from making a handful. It requires thinking through how each dish will be prepared, stored, reheated, served, garnished, and transported.

With such big batch sizes, it’s no surprise that math skills come in handy for Bill on a daily basis. Luckily, he’s really good at it. Growing up, he had access to his dad’s engineering books, and found he was interested in trigonometry and calculus. Luckily, he also discovered he had a natural aptitude for math, which is helpful in the cooking world with recipe conversions and scaling.

From Maps to Marinades

Bill didn’t always know he was going to end up in the food world though. He was born and raised in Rochester, New York, and went to Boston University in 1989 where he studied geography for two years. The culinary world quickly distracted him from getting a geography degree, though. He was working in Boston kitchens the whole time he was in school, and in New York kitchens during the summers.

Headed in a new direction, Bill applied and was accepted to the New England Culinary Institute in Montpelier. With limited enrollment, decades of being a culinary center for Vermont (the school is closing this spring due to the impacts of the pandemic), and well-known nationally (Alton Brown is a graduate), it was no small decision not to attend. Ultimately though, Bill decided to forgo a culinary degree (and the accompanying debt) in favor of hands-on experience. He landed a job with a big-name chef in a hotel kitchen and then went on to work in other Boston restaurants, working his way up the culinary ladder to sous chef and then executive chef.

The Road to A2 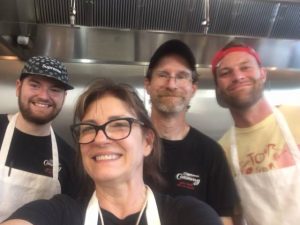 Bill’s wife, Jodi, is an Ann Arbor townie (her parents founded Temple Beth Emeth), and after meeting at Boston University, they ended up moving back here in 2001. At the time, the pair expected the move to be a temporary one, but found they loved the community too much to leave.

That’s what Bill loves about the Deli, too. He works with a group of colleagues that he says are all funny, talented, fantastic people. Many of them have grown up at the Deli together and he loves seeing how they’ve developed over time, both individually and as a team. There’s no substitute for time for creating that sense of community and camaraderie, and after 20 years, Bill’s contributions have been recognized in a rather unique way. He has a walk-in cooler at the Deli named after him—the Wallo Walk-In even has a nameplate to prove it!

Outside of the Office (…err, Kitchen!)

When he’s not at work, you might find Bill playing hockey, making music, or gardening. Hockey was a popular sport in his hometown, and as a kid, his mom would take him to see the local team, the Rochester Americans. As an adult, now he’s the one playing games, as the goalie for his team. He also enjoys playing the drums—on the same set he’s had since high school! And, he keeps busy tending to over 100 types of perennials—some of which were planted by Jodi’s mother. She was an avid gardener, so he feels a sense of responsibility to keep that going, but he also just enjoys watching things grow. As a chef, you might expect him to have a substantial vegetable garden, but he enjoys growing flowers more than produce. He actually only grows one edible thing: Concord grapes. 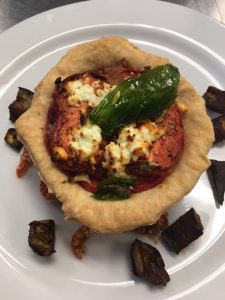 You probably won’t see or talk to Bill directly at any of our events. His role is behind the scenes, creating and executing some of the dishes that you might taste at our events.  Explore the world of terroir and taste Bill’s menus by signing up for one of the Deli’s virtual or in person events. Browse the calendar and sign up here.