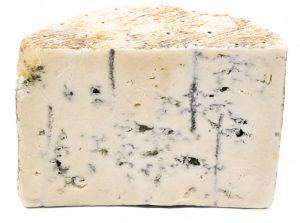 Not long before I read The Fifth Discipline I travelled for the first time to Ireland. The trip had a huge impact on my life—I’ve been back about 20-something times, I’ve come to study Irish history and culture extensively, I’ve made dozens of friends there. I love Irish music, and the work of folks like John O’Donohue. It was my last overseas trip I think before the pandemic—teaching ZingTrain at The Fumbally in Dublin.

On that first visit I was focused a lot on cheese. I read (remember, no Internet yet) what I could find in print and put together a list of dairies to visit. One of the first places I stopped was to see Jane and Louis Grubb who were making Cashel Blue near the town of Tipperary, and the incredible Rock of Cashel. The Grubbs were some of the early contributors to what is now a healthy and thriving Irish artisan cheese community—at the time they’d been making the cheese for about six years or so. While cheesemaking was relatively new, the family had been on the land since 1938. Louis took over when his father passed away; his wife Jane had been training as a chef. Soon after they moved back she decided to start making cheese. A few years later they were crafting Cashel Blue which quickly became an Irish artisan classic.

In 1992, the Grubbs decided to add another offering—a sheep’s milk blue cheese in the tradition of Roquefort, going by the name of Crozier Blue. Jane and Louis started by buying 30 ewes and setting up a very basic semi manual milking parlour in an open hay barn out in the pastures. In time their nephew Henry Clifton Brown took ownership of the farming, eventually building the stocks to a sufficient commercial scale to sell on in 2015. In 2003 Sarah Furno, Jane and Louis’s daughter, returned with her husband Sergio Furno to the family farm and cheese dairy, today she runs the Farmhouse Cheesemaking business. Like all of us they’ve had their challenges over the course of the last 12 months (cheesemaking and dairy farming aren’t easy work under any conditions). “The sheep’s milk was one of the main factors that gave us the push to keep on going last April/May,” Sarah shared. “I was having terrible visions of the flocks being butchered, something I found so difficult having built the breeding stock and in turn the category in Ireland.” If you taste their cheese you’ll likely be happy—as I certainly am—that they persevered. Crozier Blue has a wonderful meaty, earthy, creaminess—remarkably, it stands shoulder to shoulder with real French Roquefort, but with its own unique buttery, caramelly, earthy liveliness. What we have in stock now is aged for over eight months to help bring the cheese’s magical flavors to proper maturity. It’s seriously tasting terrific right now and has appropriately won a plethora of awards. Writer Caitríona Mc Bride called Crozier “The Pelé of Irish cheeses.”

You can do anything with Crozier Blue that you’d do with any other great blue cheese. The salad with sweet potatoes, spinach and blue cheese that I wrote up a few weeks ago would be great. Spread some on hot toasted Country Miche. It would be terrific crumbled on a salad with some of those Roadhouse bread croutons I wrote up below! Dutifully delicious stuffed into the Rancho Meladuco dates. Darina Allen, from the Ballymaloe Cookery School, another friend with whom I first connected on that long ago visit thirty years ago, has a great recipe for a salad with grilled pears and Crozier Blue and candied nuts. (The “how to” for the nuts is in her recipe. If you’re not up for making your own, the Spiced Pecans from Mail Order would work perfectly!)

> Read more about blue cheese at the Deli