New raw milk artisan cheddar from the southwest of England 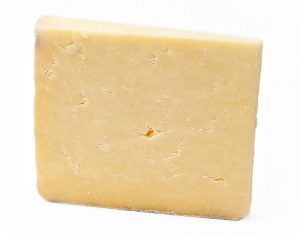 In 1982, the same year we opened the Deli, Patrick Rance published The Great British Cheese Book. Back then, when I knew little about cheese, his thin tome was a bit of a bible for me. The cheeses and the history were an inspiration, all about the sort of obscure but amazing traditional foods I was already falling in love with. Back then though, sadly, we couldn’t get a hold of any of them! My unwritten vision was to bring as much of what Rance was writing about here to Ann Arbor.

Patrick Rance was born on March 18, 1918, almost at the end of WWI, but only at the beginning of what would come to be known as the Spanish Flu. In 1953, Rance took over a small shop called Wells Family Grocers in the tiny town of Streatley on Thames. He had been a Major in the British Army, working in intelligence. Rance gladly gave most of us his adult life to the cause of traditional cheese, and he did it at a time when he was very much a lone voice in an enormous industrial wilderness. Asked in 1982—the year we opened—to comment on supermarket cheese, he observed: “The first results, a few years ago, were cheap and nasty. Now they are still nasty but no longer cheap.” This last was what, at that time, was being exported to the U.S. The names on the labels were the same as those of the traditional cheeses Rance was advocating for, but the cheese beneath them was factory made and essentially flavorless.

In his book, Rance wrote lovingly and passionately about the old ways—what had once been easily available in almost every village and town, and the small number of cheesemakers that were, in the early ‘80s, still left. Like those who ask us now to change our ways before climate change destroys our ability to live on the planet, Rance appealed to anyone who would listen to help save British cheese. I had the honor of meeting him to chat about cheese three or four times before he passed away in 1999. Our talks were some of the highlights of my food life. What an amazing visionary. While his military background and ever present monocle had me imagining someone rather gruff, he was, in my interactions with him, gentle and kind, caring about both people and the artisan past of great cheese. Patrick Rance inspired many, not least, my good friend Randolph Hodgson of Neal’s Yard Dairy. Thanks to Randolph, who once drove me to meet Patrick Rance in person, and others at Neal’s Yard, we have brought cheeses of the sort Rance wrote about to Ann Arbor. His vision, and ours, has, to a great extent come true.

Patrick Rance’s affection for good cheese seemingly started in his youth, in the years when traditional cheese was still readily available in the UK: “I can still remember my mid-morning treat on sunny days in the 1920s as I played in the east end vicarage garden of my early childhood. Through the kitchen window a fond hand would reach out bearing a buttered crust crowned with hunks of nutty flavoured cheddar.” That cheese might well have been very much like the Pitchfork Cheddar we’ve started getting in through Neal’s Yard from the Trethowan brothers on their farm near the tiny hamlet of Hewish on the northern edge of Somerset. Two brothers, one shared vision, great passion, awesome cheese.

You might know the Trethowan brothers from their work from the very fine Gorwydd (pronounced “Gor-with”) Caerphilly. Seven years ago, they moved their farm southeast to Somerset, so they could get the kind of single source organic milk they were after in order to improve cheese quality even further. They settled on Puxton Court Farm, about five miles from the village of Cheddar. Their milk now comes from a single herd of organic, pasture-fed Holstein-Friesian and Jersey cows, which means they have particularly rich and creamy milk to make cheese from. They set out to honor the following list of criteria, which is essentially a big part of what they would put into a vision if they were to write one:

Pitchfork has been accepted into the Slow Food Artisanal Cheddar Presidium, an honor that goes to the other three traditional Cheddar makers we buy from: Westcombe, Keen’s, and Montgomery’s. The finished cheese is mellow, softer still than some of the 18-month-old English cheddars we get (also all through Neal’s Yard). It’s juicy, milky, maybe even a subtle citrus note. Great with that marvelous Rhubarb Marmalade from American Spoon. Excellent too with their rare but beautiful Wild Elderberry Jelly. And Pitchfork is really fine paired with fresh apples, or added to an omelet. When I nibble at it, I think back to Patrick Rance, who once stood almost alone in advocating for traditional British cheese, a man whose passion, vision, determination and relentless evangelism for the cause has, half a century later, made the moment possible.