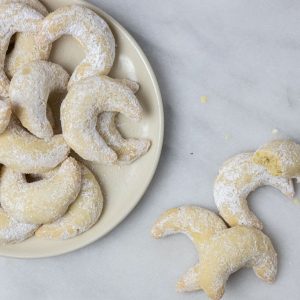 One of my all-time favorite Bakehouse cookies are Hungarian almond kifli. If you, like me, have a high affection for Mexican wedding cookies or any other powdered-sugar-coated, kind of crumbly, butter cookie of that delicious ilk, I’m totally confident that you’re gonna love these. A couple of these tasty little crescent-shaped cookies are an ideal accompaniment to coffee or tea. If you like a bit of something sweet after dinner but don’t want to overdo it, the kifli are pretty surely a good solution. Each time I taste them I find myself savoring them anew. Slightly crumbly, buttery, melt-in-your-mouth, they’re the kind of small, only slightly sweet, delicate, compelling cookie I could eat every day!

The name kifli originally referred to the cookie’s crescent shape and to other, related, savory breads of this sort. (Some say kifli were the precursor to the French croissant!) Hungarian culinary lore says they were first made to celebrate the freeing of Buda by an alliance of Russia, Bavaria, and Austria from the Ottoman Turks in 1686. (Earlier that year Russia had signed a treaty with Poland and Lithuania that made the alliance possible. It was given the inspiring but sadly inaccurate title, the Treaty of Perpetual Peace.) The Bakehouse’s kifli are made with ground almonds, flour, butter, sugar, vanilla bean, and vanilla extract as well as powdered sugar.

About seven or eight years ago I sent a box of kifli as a gift for my friend Alex Carbone out in California. Her response was so poetic that I feel compelled to share it:

When I opened the package, I had a Proustian moment, wherein for a second I remembered the smell of the Polish cookies my Aunt Helen used to make at Christmas. I drink a lot of tea and sometimes coffee, and I like to just have a little something, not a big guilt inducing something, but just a tasteful, ladylike cookie, and these were so dainty and so crumbly and so not too-sweet. And I liked the hit of salt at the end. Yum! The other folks I served them to also loved them, including a guy whose wife is Hungarian. He was wondering where to get them because they tasted just like stuff he’s had in Hungary. A smashing success all around.

I agree. The almond kifli truly are terrific. Great with the Guatemala coffee, or sipped with some good tea (try the Milk Oolong at the Deli).