The best of Budapest arrives in Ann Arbor 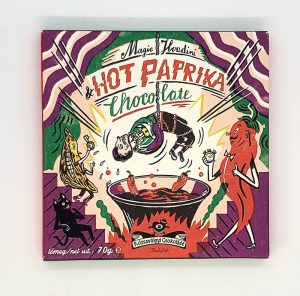 It was in the fall of 2011 that Frank and Amy from the Bakehouse and I (along with my good friend, food writer Molly Stevens) took our first trip to Budapest. It was the beginning of an exploration that, ten years later, has made Hungarian baked goods into one of our big specialties at the Bakehouse. The Dobos Torta, Esterházy torte, langos, rétes, and the wonderfully comforting Somodi Kalács and many more are all regular—and popular—offerings!

One day while walking around the central district of the city we happened past this beautiful little jewel of a chocolate shop. The packaging looked so good it was impossible for someone like me not to pursue it further! And, happily, the flavor was as good as the package! Finally, ten years later, we have these chocolates at the Deli and Candy store. The name of the brand, Rózsavölgyi, looks a bit intimidating to an English speaker (as do most Hungarian words). “Rozha-vol-yee” is the closest I can get to proper pronunciation. In English it means “Valley of the Roses,” which is an evocative, and positively memorable, pre-Valentine’s image to stick in your head! The little artisan chocolate shop was started by chocolate maker Katalin Csiszar and her husband Zsolt Szabad in Budapest in 2004. They were the first new chocolatiers to start up after the Communist government fell. Katalin, an artist by background, does all the chocolate design and much of the original packaging. Zsolt manages the production. Like so many of the chocolates we work with, the Rózsavölgyi folks are operating bean to bar—they have positive relationships with growers in all the producing countries with which they work. Zsolt roasts at the lighter end, so even the darkest of the Rózsavölgyi chocolate is still on the subtler side of the spectrum.

The packaging is exceptional. It was done for Rózsavölgyi by a German artist, working under Katalin’s creative direction. Honestly, if you like design, it’s worth buying these for that alone—but that said, the chocolate inside is so good it’d be well worth eating no matter what the boxes looked like!

Of the many marvelous offerings we receive from Rózsavölgyi, my favorite remains the 73 percent dark chocolate spiced with hot Hungarian paprika. They recently redid the label with a cartoon drawing that’s worthy of a Zingerman’s Mail Order catalog cover—it features Harry Houdini who gets center stage in the belief that pairing hot paprika and dark chocolate is a bit of a feat of magic. Houdini, if you don’t know, was a Jewish Hungarian—born Eric Weisz in late March, in 1874 in Budapest—who came to the U.S. on the 3rd of July when he was only four. The family settled in the unlikely spot of Appleton, Wisconsin where young Eric’s father became the rabbi at the Reform Congregation there. Eric began his magic career in 1891, but it took him nearly a decade to change his stage name to Houdini and begin to gain fame. You can read his life history online—it’s pretty incredible. Houdini was a character in E.L. Doctorow’s classic Ragtime, along with Emma Goldman (it’s still one of my favorite films). He died on Halloween of 1926 in Detroit.

Coming back to the chocolate bar… Intriguingly, for a history major like me, it features two foods that were unknown in Hungary up until a few centuries ago, but today dominate the cuisine. Remember, chiles (paprika) and cacao (chocolate) came from the Western Hemisphere! In the last year they’ve tweaked the recipe a touch which has made the bar one of my favorites. On the chocolate front, it’s dark, complex, delicious. The beans for the bar are the special Nacional variety from Peru. The paprika—which, if poorly done could easily be intrusive—takes it to a whole other, almost magical, world of flavor. Zsolt shares:

The paprika is from Szeged (Hungary), by a producer called Rubin. This is one of the two major areas where great paprika is grown. Hungary is most famous for the sweet red paprika which are also used in some of our products, but some hot variants are also exceptional. Instead of ground hot paprika, we add hot paprika oil and crushed hot paprika chips to add to the texture and complement the taste. In order to elevate the paprika flavours, hints of cloves and cinnamon are added.

The finished bar is truly remarkable. The heat is slow to rise, never dominates, but is definitely distinctive. I love it! And I’m not alone. Zsolt says, “Many of our most loyal and oldest customers are complimenting on it, which is very unusual. It’s unusual that they stop me in the street to tell me how great it is!”

Seriously, whether it’s for casual eating on your own at home on a Tuesday evening, a gift for one of your chocolate-passionate friends, or just to nibble on with your morning coffee (a combination I keep returning to), put this one on your shopping list soon!