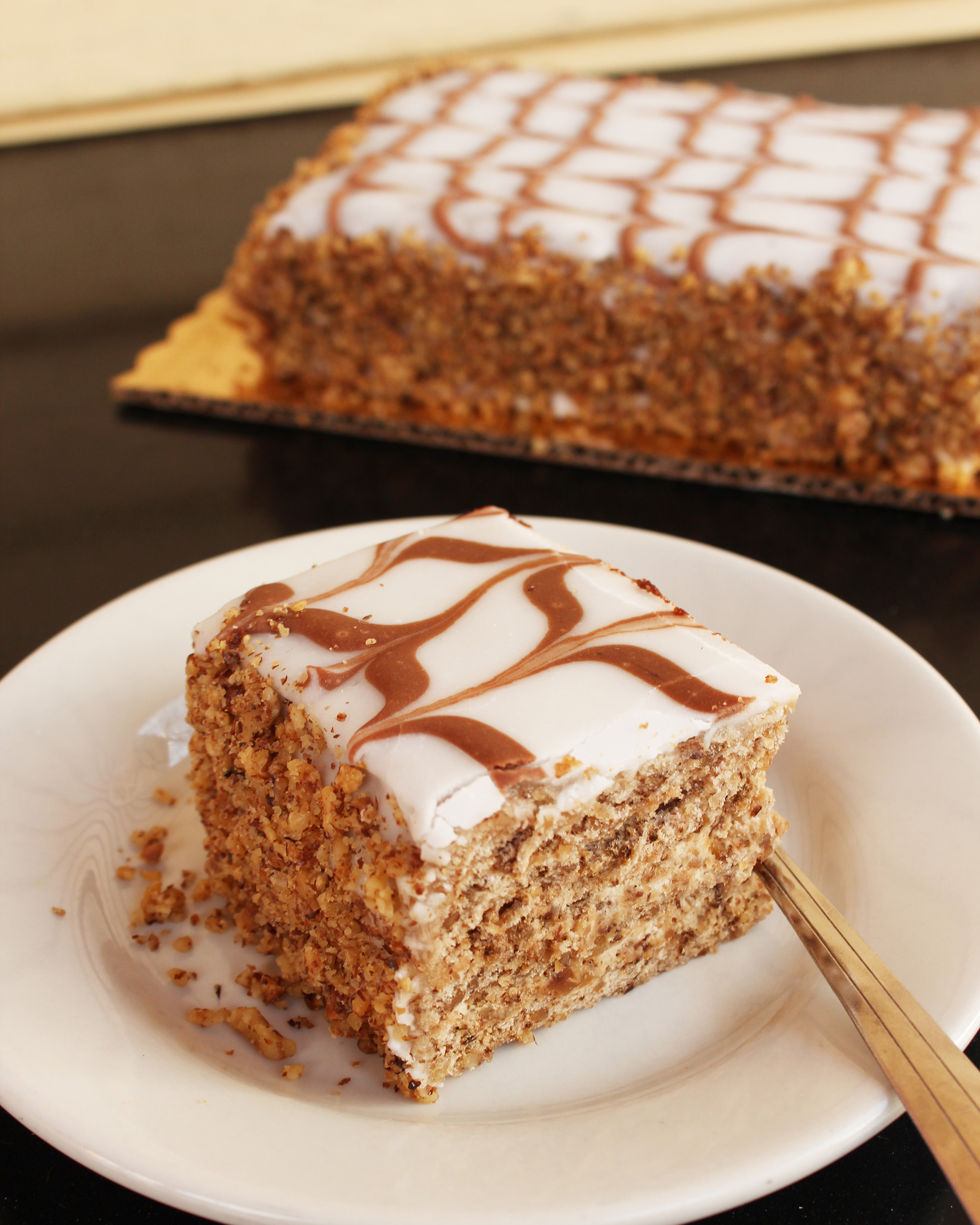 Nearly all of the food we work with here at Zingerman’s is, in its roots, poor peoples’ food. Even some of our most expensive items—Parmigiano Reggiano, extra virgin olive oil, artisan bread and pastry from the Bakehouse, prosciutto di Parma, pastrami, pulled pork bbq … though relatively costly by modern day industrial standards, all got their start as staples in country kitchens that couldn’t afford fancier food. The exceptions? Balsamic vinegar, which was made and consumed only by noble families. Fine chocolate, which could only be made where producers had the capital to pay for fancy equipment. And this now famous, late-19th century Esterházytorte, or as we know it in English, Esterházy Torta.

I’ve got Esterházy on my mind this week because Kristi Brablec, managing partner of Zingerman’s Food Tours, has been texting and posting from Hungary—she’s leading our first food tour in nearly twenty months! Kudos to Kristi for persevering through the pandemic, and thanks to our partner in Hungarian taste-travel, Gabor Banfalvi. I can’t say for sure that Kristi has eaten a slice of this terrific torta in the last ten days, but it’s a pretty safe bet that she sat near someone who was. Cafés and pastry have long been at the center of life in Budapest. As Gabor said, “Back in the turn of the [20th] century, which we consider the height of Hungarian coffeehouse culture, Budapest was home to around 600 coffeehouses. These were not simply places that people visited, these were places where people lived their lives.” Not unlike our own era, writers and poets often took up residence in a particular spot. Gabor shares, “these coffeehouses would provide paper and ink. In many cases they would also provide [creatives] a line of credit, and patiently wait with the bill until the sometimes poor writers would get their money for their pieces. Waiters would take messages for them and also collect mail for their writer clientele, providing extra services for writers who otherwise were on their own as freelancers.”

While the writers in the cafés were often poor, the man for whom the Torta was named was anything but. It was developed in honor of Prince Esterházy, Paul III Anton, who lived in the late 18th and early 19th centuries. Stephens Cabot Abbott, who authored books about Napoleon Bonaparte, the American Civil War, and Daniel Boone, wrote in the middle of the 19th century that,

Prince Esterházy, a Hungarian baron, is probably the richest man, who is not seated on a throne, in the world. He lives in the highest style of earthly grandeur. One of his four magnificent palaces contains three hundred and sixty rooms for guests, and a theater. His estates embrace one hundred and thirty villages, forty towns, and thirty-four castles. … He has quite a little band of troops in his pay, and moves with military pomp and gorgeous retinue from palace to palace.

Esterházy’s holdings were so vast that at one point he is said to have had 2500 shepherds on his staff!

Esterházy’s cake followed in his financial footsteps—exceptionally rich, very elegant, and more luxurious than an average 18th century Hungarian would ever have eaten. It was developed in Esterházy’s honor in the second half of the 19th century and became—along with Dobos Torta and Rigó Jansci—one of the most popular baked goods in the cake-crazy city of Budapest. Fortunately, times have changed, and while Esterházy Torta is not exactly inexpensive, given all the work and great ingredients that go into it, the Torta at the Bakehouse is pretty reasonably priced.

All that background aside, what you’ll likely most want to know is that the Esterházy Torta tastes terrific. And it’s beautiful to boot. Layers of toasted walnut cake filled with a magnificent mixture of vanilla bean pastry cream, fresh whipped cream, and more toasted walnuts, lovingly decorated with vanilla and dark chocolate poured fondant in a distinctive wave design used specifically for Esterházy cakes. Complex layers of flavor; beautiful, delicate, and most definitely delicious. Stop by the Bakehouse or the Deli, buy a slice, and make a mental toast to positive social change and great cake! As Amy and Frank wrote in Zingerman’s Bakehouse, the Esterházy is “pure elegance—petite and beautiful to look at, refined and balanced in flavor, with a perfect level of sweetness—and it’s satisfying in delicate-sized pieces. Esterházy could end up being your hallmark dessert, the perfect finish to an inspired meal.”