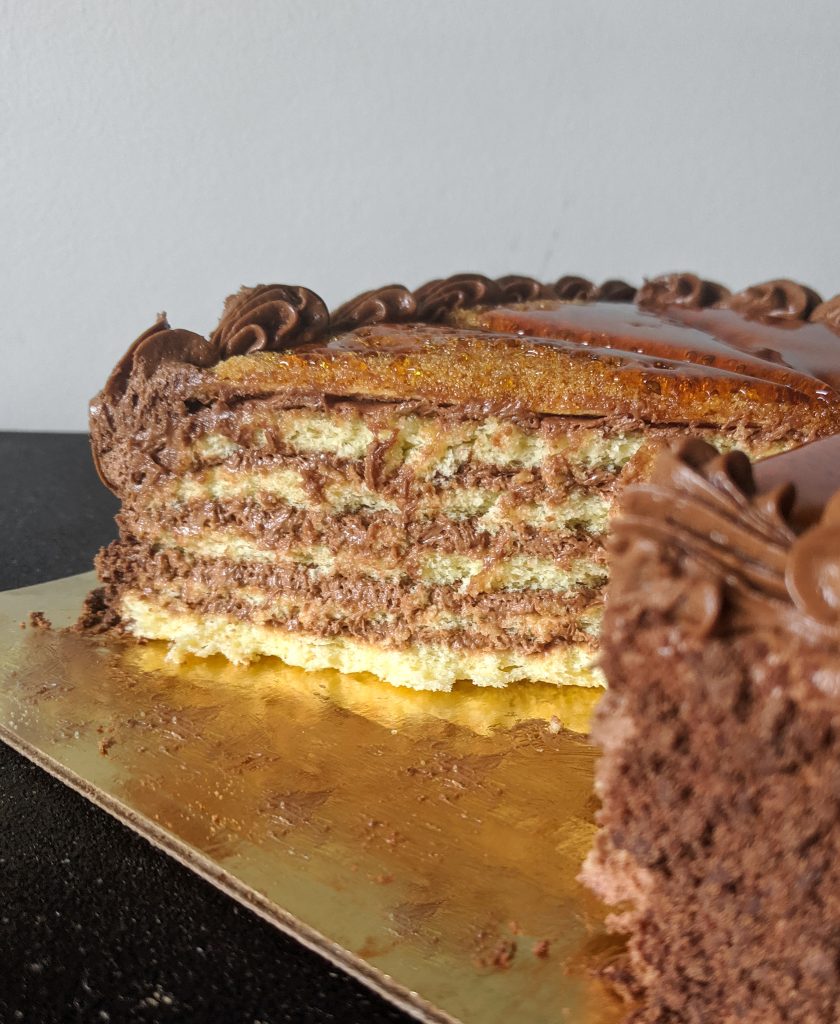 At the height of the Austro-Hungarian empire, in the second half of the 19th century, the arts, architecture, music, and science all bloomed. So too did pastry-making—like the Rigó Jansci Torta that Zingerman’s Bakehouse makes so beautifully, the Dobos Torta dates to that same era. It was created in 1884, and named after its inventor, József Dobos, one of the best-known pastry chefs of that era, in what’s probably the most pastry-loving country in Europe. (To give you some American historical context, 1884 is the year the foundation was laid for the Statue of Liberty, and also when the Washington Monument was completed, making it the tallest structure in the world!) Dobos had a well-known specialty food shop in Budapest that sold everything from caviar to cake. The torte he developed, and named after himself, quickly became a local classic. In 1885 he showed the Hungarian dessert at the National General Exhibition—over 100 people staffed the pavilion and Queen Elisabeth and Emperor Franz Joseph came by to sample the new creation. He soon became a supplier to the royal court. The Dobos Torta was so popular that an entire book was published about it later that year.

But Dobos didn’t stop there. Long before UPS, FedEx or DHL, Dobos built wooden boxes in which he started to ship his delicious delicately-layered torte to pastry eaters all over Europe. Later, demonstrating a spirit of generosity that we can all learn from, Dobos donated the recipe for the torte to the Budapest Pastry and Honey-Bread Makers Guild in 1906, when it spread all over the country and eventually all over the world.

A Hungarian Dessert Almost Too Pretty to Eat

The Dobos Torta at the Bakehouse is a beautiful work of art to behold! It’s made of five thin layers of very light vanilla cake, sandwiched around a chocolate buttercream. More chocolate buttercream coats the sides of the torte, which are then dusted with chocolate crumbles. The rectangular cakes are topped with a thin layer of almost-crunchy slightly chewy, delicious caramel. It’s divine. At the Bakehouse, we make the buttercream with Valrhona chocolate and a touch of espresso. Buttercream, by the way, was barely known at the time, so Dobos was on the cutting edge of his field. The cake is topped with a crispy layer of translucent golden caramel. Kudos to the Bakehouse pastry crew for being able to create such a wonderfully delicious and accurate rendition of a classic Hungarian dessert! 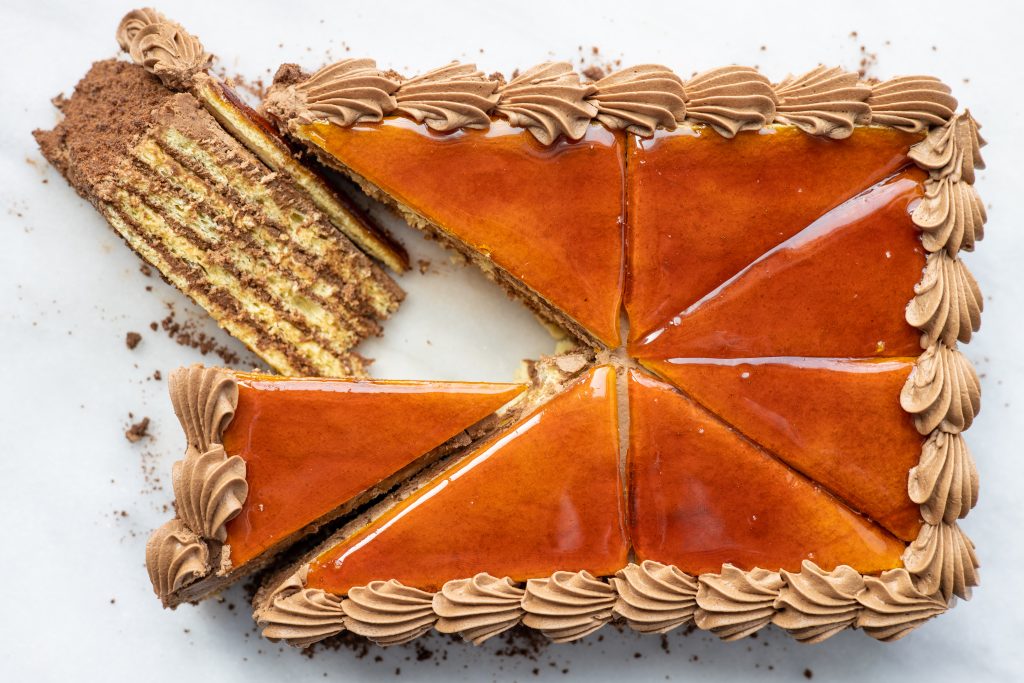 Just to put the Hungarian passion for this very special pastry in proper perspective, there was an entire pavilion dedicated to the Dobos at the Millennium Exposition in 1896, and then again in 1962, at a three-day festival set up to honor the Dobos’ creation. Today, our Bakehouse makes it so well that we might want to start thinking about our own exposition—I can’t tell you how many Hungarians and Hungarian-Americans have told me the Bakehouse’s cake is as good as anything they’ve eaten in Budapest. One Hungarian-American told me that her 80-year-old grandmother suggested she could just pick one up from the Bakehouse rather than make her own!

You can pick up Dobos Torta as a whole cake or by the slice at Zingerman’s Next Door Café. Plus, it’s terrific with an espresso!

This is a seasonal item and is available several times throughout the year. Check out menu for availability!