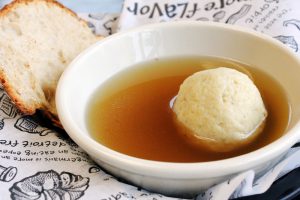 As we shift into the middle of winter, there are any number of ways we can take care of ourselves through the cold months still to come. I wrote a whole long piece about comfort food in the current issue of Zingerman’s News. Top on the list? Of course—chicken soup! The cure of cures, the culinary potion of potions… if there was a Comfort Foods Hall of Fame, homemade chicken broth would be in the first class to enter. If there was a comic series of comfort food super-heroes, chicken soup would be my choice for the feature role. There’s not much it can’t do! Whether it’s with noodles, matzo balls, rice, or kreplach, a bowl of it leaves me feeling better every time.

Laurie Colwin once wrote, “To feel safe and warm on a cold wet night, all you really need is soup.” Another amazing author, Willa Cather once said, “A soup like this is… the result of a constantly refined tradition. There are nearly a thousand years of history in this soup.” In terms of my own family’s likely story with chicken soup, Jews started arriving in Poland at the end of the 11th century, fleeing Papal orders in Rome to kill heretics. The forced exodus was known as “the migration of the heretics.” The change from the cooking of the Mediterranean to that of Eastern Europe must have been shocking. To go from a plethora of ingredients and abundant sun, where stuff like olive oil, wine, fruit, an array of fresh vegetables, herbs, and fresh ocean fish were essentially every day foods… to the short days of winter and the shortlist of foods in the poor person’s pantry this time of year—the potatoes, onions, radishes, pickles and poultry that would have dominated their eating in Poland—might have been as depressing and disconcerting as the actual move. Over the centuries, the chicken started to play a role in Eastern European Jewish culture (where my grandparents all came from) that was parallel to that of the pig in the American South—every part was put to use in some practical and productive way, and it was hard to imagine life without it. In a more modern and very American sense, the first canned chicken noodle soup looks like it came from Campbell’s in the 1930s, another era in which people would clearly have sought comfort. 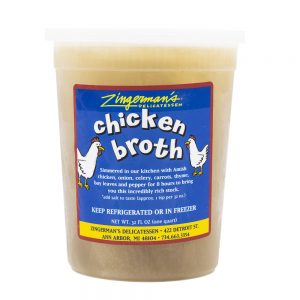 What we’ve been making at the Deli for 39 years now is pretty much the way my grandmother taught me to do it. Lots of chicken (my grandmother used kosher, we opt for Amish) simmered for hours with carrots, celery, onions, parsnips, and parsley. Strained of its solids, and served with noodles, rice, matzo balls, kreplach (Paul’s favorite) or, the way I like it, with chunks of the Bakehouse’s Caraway Rye dropped in. The chicken broth freezes well too, so keep a couple quarts on hand for culinary emergencies. Just writing about it helps me feel calmer.