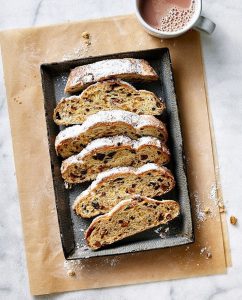 While there are many recipes for stollen, the Bakehouse’s has been a big favorite around these parts—and around the country—for well over 25 years now. It’s made with an incredible array of ingredients including sweet butter, Bacardi rum, lemon, orange, Michigan dried cherries, citron, currants, almonds, golden and Red Flame raisins, Indonesian cinnamon, lots of real vanilla, and more. When you nibble a bit, at first you get a touch of creaminess on the tongue from the powdered sugar. Then you taste the butter and dried fruit as you break through the thin crust, followed by the tartness of the dried cherries, and the sweetness of the raisins. The citrus stays brightly in the background; the vanilla and cinnamon come through subtly, but meaningfully, in the finish. And it all lingers with a really nice, mouth-watering finish. I snacked on some the other day while sipping a cup of super smooth, beautifully delicious, Holiday Blend brewed in a syphon pot at the Coffee Co.

For a bit of historical context—in case you thought politics and policy struggles were only modern headaches—the origins of stollen were with a much simpler, staid, and stern product. Early stollen was hardly something to celebrate—it was made only from flour, oats, and water, made in a world in which decisions were being made for bakers from many thousands of miles away. Back in medieval times, Advent was a time of serious fasting—bakers were banned from using butter. Saxon German nobles wrote to the Pope and requested permission to stop using oil (which was very rare and costly in Germany) and switch back to butter. Their request was denied by Pope Nicholas. It took six more Popes before Innocent VIII, in 1490, gave permission in what became known as “The Butter Letter” for bakers to use butter without having to pay a fine (though still only when the stollen in question was baked for the local nobles). Later there was a way to buy dispensations to use butter, but the cost remained out of reach for everyday people.

The story is a superb example of what happens when decisions are made far from the place where the impact is felt. Giving up butter when you live in Rome—where olive oil was always in abundance—was hardly a big deal! But in Germany, where butter and dairy were what you built your daily meals around, it was another story altogether. It happens today, still, in big companies and in countries—a decision that was barely relevant in the lives of the rulers caused serious hardship for those being ruled. When you’re not looking someone in the eye, when you don’t sit at the counter next to them, when you don’t see them in church, or in the park, or pick their kid up after school sometimes, it’s a whole lot easier to be harsh. The consequences in communities are not insignificant. In her book, Butter: A Rich History, Elaine Khosrova writes, “It seems hardly a coincidence that most of the dairy-rich countries producing and using butter were the same nations that broke away from the Roman Catholic Church in the sixteenth century.”

But back to the moment, the main thing is that the Bakehouse’s butter-laden stollen tastes terrific! The stollen warms up beautifully on Xmas morning (or any other morning, for that matter). Grace at the Deli recommends “grilling” slices of it in butter in a sauté pan till the cut face of the stollen has turned golden brown. It comes in a lovely cloth, stollen-sack too!

> THIS IS A SEASONAL ITEM AVAILABLE DURING THE WINTER HOLIDAYS. CHECK FOR AVAILABILITY!