A terrific taste of Eric Martin and Provence 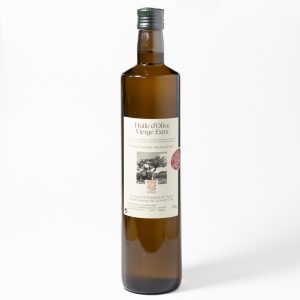 If you’re looking for a special olive oil to grace your autumnal table, give some thought to this great one we get from Eric Martin in southern France.

I learned about this one twenty-something years ago through Mort Rosenblum, longtime political writer and former bureau chief for the International Herald Tribune, who had interviewed Eric’s grandfather for his book Olives: The Life and Lore of a Noble Fruit. (Mort has retired from the Paris bureau and is teaching journalism in Arizona, but his writing about politics remains powerful.) Eric’s father, Roger, had trees of his own, but he made much of his living by looking after the 4,000 trees on the estate at the La Treille Estate near the Provençal town of Tourtour. Eric inherited his father’s job at La Treille and has followed in his olive-growing footsteps.

“What makes your oil so exceptional?” I asked Eric when we met years ago. “The terroir,” he responded quickly, referring—as almost all French farmers do—to the influence of the soil on the flavor of the fruits and vegetables that grow in it. The dry, rocky soil of the area dictates that Provençal plants have to really fight for their lives. But the abundant sun and the struggle for survival yield fruits and vegetables that are often far more flavorful than bigger specimens from areas blessed with bigger rainfalls. He uses an unusual blend of seven varietals: Bouteillon, Leccio (an Italian import), Picholine, Cailletiers (aka, Niçoise), Tanche, and Caillet Roux (an old variety which drop quickly from the branch when they’re ripe). Perhaps most interesting of all is the seventh, the Ribier, from an old historic tree that, not long ago, was on the edge of extinction.

The majority of Eric Martin’s oil goes to locals to whom he has long-standing annual commitments. At some point he had an above average yield which got us “in the door” and has allowed us to keep buying some ever since. As is common in Provence, Eric leaves his oil unfiltered. The result is delicious; very buttery, round, fruity, with a gentle, but distinctive olive flavor. My friend Francine Maroukian, once wrote in Travel & Leisure that it was, “Like Catherine Deneuve: silky, subtle, quintessentially French.” I’ve enjoyed it on salads of all sorts. It’s superb with any type of vegetable dish, such as roasted fennel or sautéed fresh local spinach. I love it on warm potato salad topped with crumbled French Roquefort cheese. It’s great, too, simply on just-cooked potatoes. Easiest of all, eat it on a bougnette (the French version of bruschetta): toasted Farm bread rubbed with garlic and doused in a generous bit of this outstanding olive oil.

> Order this oil at the Deli for pickup or Ann Arbor delivery!

> Order this oil at Mail Order and have it shipped to you!