A Great, Hard-to-Get, Grape Jelly at The Deli 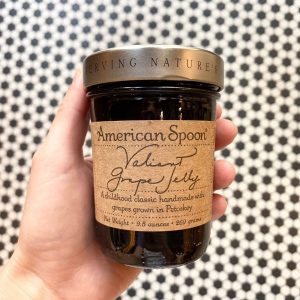 In one of the many ways that I feel like I never fit, I will confess here, publicly, that as a child I never liked peanut butter and jelly sandwiches. Even now, all these years later, when I clearly know better, I still sort of wince, unwittingly, at the thought of them. But like so many things that I once made faces at but later found out were actually fantastic, I have changed my beliefs. If you make me a PB&J with this incredible grape jelly, bread from the Bakehouse, and any of the notable nut butters we have at the Deli, I will be singing a totally different tune than I was when I was 12. What I once would have turned down even if you’d tried to pay me, I will gladly now pay good money to eat.

The Valiant grape, from which it’s made, is a variant on the much better-known Concord varietal. I have it on my mind because right now, Concord grapes are out in abundance at the Farmer’s Market. And like so many old school seed varieties, they bring a whole different world of flavor and texture than most of us modern-type eaters have become accustomed to. If you haven’t had them, I encourage you to ASAP. They’ll only be out there for another week or three. If you, like me, grew up on seedless green grapes from the grocery store, get ready for a whole new set of flavors. The deep purple-blue Concords are sweet, rich, gently sour, and with what is descriptively known in the trade as a “slip skin.” Remember when you eat them that they have seeds. They have a wonderfully, well-rounded, almost earthy, flavor that gets my attention anew every time I eat one.

The Valiant variety was developed in 1983, the year after we opened the Deli, out at South Dakota State University by Professor Ronald Peterson. It’s a cross between wild grapes Peterson found growing along the Missouri River in eastern Montana and an old, resilient New York State grape named Fredonia that was itself descended from the original Concord. But the roots of the grape’s history go back 150 years or so to the town of Concord, Massachusetts, where one Ephraim Bull did the horticultural work to first develop it. Bull’s first job was as a goldbeater—the 5,000-year-old profession in which people pound gold to get it thin enough to put gold leaf onto books or paintings. While he earned his income from gold, Bull’s passion was grape growing. Over the years, he grew determined to develop a variety better suited to the cold climate of New England. In 1849, his years of patient breeding paid off, and the Concord grape was “born.” Four years later Bull brought home an award for his work, and Concord grapes became a hot commodity. Soon after, Bull began selling starts of his vines for a then impressive price of $5 each (roughly $140 in today’s value).

Of equal interest to Bull’s grape growing, is the intellectual ecosystem in which he was working. Bull lived in the town of Concord, on the same street as Ralph Waldo Emerson, Nathaniel Hawthorne, and the Bronson Alcott family (the parents of author Louisa May Alcott). Bull was actively engaged with them all in abolitionist work and in discussions about Emerson’s Transcendentalist philosophy—this was in the decade before the Civil War started. Emerson had befriended writer Margaret Fuller (written about beautifully in Maria Popova’s fine book Figuring) and, with her influence, had become active in the mid-19th century struggle for women’s rights. Ephraim Bull, it seems, was in the conversational mix for many of these get-togethers of the Concord group. I would imagine that they would likely have been snacking on some of Bull’s beautiful purple-blue grapes while attendees bounced various philosophical beliefs about. It was not long after one of those conversations that, in the spirit of humility, Emerson once wrote, “A great man is always willing to be little.”

The Concord grape came to fame a few decades later through the work of another thoughtful New Englander, this time a devout Methodist minister by the name of Thomas Welch. A strong advocate for temperance, Welch worked hard to create what we would now call “non-alcoholic wine.” An adamant abolitionist, Welch was active for many years in the Underground Railroad. He finally found success with his work on “wine” by using Louis Pasteur’s innovative pasteurization methods to keep the grape juice from fermenting. Living in Massachusetts as he did, Welch worked with Bull’s Concord grapes. Welch’s Grape Juice was first sold as such in 1893, so it would likely have been on the shelves at Disderide’s when Rocco opened his grocery at the corner of Kingsley and Detroit Streets a decade later in what is now the Deli building. Welch’s Concord Grape Jelly came later than the “wine,” and was introduced near the end of WWI—right about the time the Spanish flu was starting to circulate in the United States. It was marketed then with the name “Grapelade.”

All that history aside, what we happily have on hand is this amazingly tasty Grape Jelly from our friends at American Spoon Foods. My friend Justin Rashid, and now his son Noah, have been making marvelous jams, sauces, and butters since about the same time Paul and I opened the Deli in the early 80s. This Valiant Grape Jelly is a little known, very limited edition jewel in their wide-ranging repertoire. This summer, with Covid and other crises at hand, none of this great jelly was made, so our supply is strictly limited.

What do you do with it? Make a world class peanut butter and jelly sandwich with that superb peanut butter we get from Koeze over in Grand Rapids. Or take things one step beyond with the marvelously mad flavors of the Georgia Grinders’ Pecan Butter (or have at it with their Hazelnut or Almond as well. All are outstanding). You can use it with the Creamery’s handmade artisan cream cheese (made much as it would have been when Bull, Welch, Emerson, and Alcott were doing their work) for a cream cheese and jelly sandwich par excellence. Same in a jelly omelet, or spoon some onto blintzes, crepes, or gelato. Add a bit to a vinaigrette or mix it into your yogurt. Spread some on a toasted Zinglish muffin. or on a slice of State Street Wheat. You can also add a spoonful of it to a scallop or shrimp reduction with good sweet-savory results. Or pick up some fresh Concord Grapes and make a Jamwich (you will have to navigate around the seeds, but I feel confident you can handle it).

Whatever you do with the American Spoon Valiant Grape Jelly, keep in mind the amazing historical context in which it came to be what it is—the humble, grounded, wise voices of Emerson, Hawthorne, Alcott, Fuller, Transcendental philosophy, abolition, and women’s rights. In the scheme of the world, grape jelly, no matter how good, is a small and seemingly insignificant, thing. But in the spirit of humility, it’s good to remember that the little things matter. As the forward-thinking Margaret Fuller once wrote poetically, “Reverence the highest, have patience with the lowest. Let this day’s performance of the meanest duty be thy religion. Are the stars too distant, pick up the pebble that lies at thy feet, and from it learn the all.”

Shop for this jam at the Deli or online for pickup or local delivery.