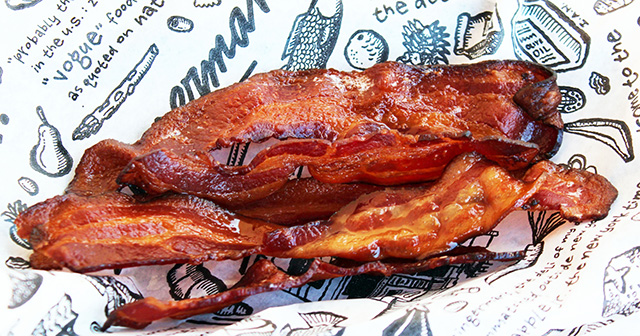 If you want a big-time testimonial about this bacon, take it from the late and great writer, R.W. Apple, who put in print in the New York Times that Nueske’s was, “the beluga of bacon, the Rolls-Royce of rashers.” I’ll just say that its flavor is meaty, subtly sweet, moderately smoky, and so good that we’ve been cooking it—and enjoying it—every single morning at the Deli for over thirty-seven years now.

Tanya Nueske, granddaughter of the founder, Robert Nueske, is as passionate about her product as you’re going to get. She took over the firm when her father, Bob Nueske, passed away very sadly and unexpectedly in 2015. She’s a great testimonial for living a bacon-based existence: “I eat bacon so much,” she told me. “I eat it plain all the time. Basically,” she added, stating the almost obvious, “we use bacon with everything!” Tanya’s high energy comes across as what it is—the sincere love of, and passion for, her product. “What we do is a very old tradition,” she told me. “My grandfather started up selling the bacon in 1933. He started out smoking over applewood. And he had a way of doing it and a style that came from his grandparents.” That would be Wilhelm and Wilhelmina Nueske who came to Wisconsin from Prussia in 1882, exactly 100 years before we opened the Deli in Rocco Disderide’s building.

Nueske’s works with higher quality hogs, crossbred with Pietrain pigs because of the latter’s excellent lean-to-fat ratio. They cure their fresh slabs of bacon in brine for at least 24 hours, hang them to dry for a day or so, and then smoke them for at least another 24 hours. “We still use actual applewood logs,” Tanya told me. “People should know that ‘applewood smoke’ can mean almost anything these days—apple juice, apple smoke flavoring, liquid smoke . . . . But we only use real logs of Wisconsin applewood.”

Without question, over all these years, Nueske’s has proven one of the most popular foods we’ve got for sale anywhere in our organization. Its flavor is on the mellower side, with soft sweetness from the applewood that I think amplifies the natural sweetness in the high-quality pork the family goes to such lengths to source. We sell loads of Nueske’s for folks to take home to cook in their own kitchens, and we also use it extensively here. The Deli features it on a dozen different sandwiches and breakfast plates. Try it on a #400 Renee’s Kitchen Magic: Applewood-smoked bacon, two eggs, and Cabot Vermont cheddar cheese on a toasted sesame bagel from Zingerman’s Bakehouse. It’s also become a big hit on what Zingerman’s Roadhouse calls the 24-7 Burger (one of Katie Frank from ZingTrain’s favorites)—the bacon, having been smoked for 24 hours, sitting astride a couple slices of 7-year-old Wisconsin cheddar which in turn has been melted over a burger freshly ground from Niman Ranch beef. 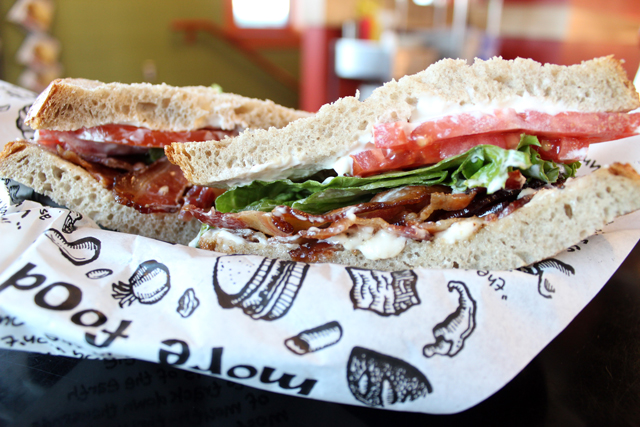 Most importantly, when in the midst of tomato season, Nueske’s is a marvelous start around which to build a B.L.T. Using some great bread from the Bakehouse—I’m pretty partial to the Roadhouse bread, or if you want to go slightly more mainstream (what one young customer a few weeks ago called “normal bread”), try out the terrific, but little known, Bakehouse White for some toast! —

Zingerman’s Deli sells Nueske’s Applewood Smoked Bacon from our meat counter for home and fresh loaves of bread from our breadbox. Swing by and pick up some B.L.T. fixins!

You can even have the bacon locally delivered to your home or to your car through curbside pickup! Know a bacon lover who doesn’t live in town? Or even one who does? We have a plethora of powerfully good bacon gifts to ship nationwide!