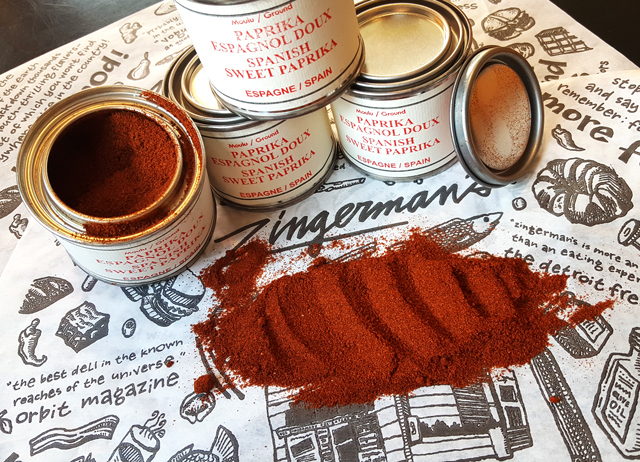 More Than For Color

It’s hard to believe that something as seemingly passe as “paprika” could have such a big impact on your everyday eating. But sure enough, this stuff has been appearing—either as a main feature, or a bit of an elegant add on—at almost every meal I’ve made over the last month or so. It truly is terrific—takes the spice to a whole new level. Even someone like me—who’s had the best of Spanish and Hungarian offerings for many years now has been wowed. Try it—I’m betting you will be too.

For context, you should probably know that paprika—pimenton in Spanish—is to Murcia in eastern Spain what saffron is to La Mancha in the center; the core spice around which almost everyone’s cooking is based. In Murcia, people use pimenton like people in Parma use Parmigiano Reggiano—every day and at almost every meal.

While paprika is often dismissed in North America as something to use merely for color, properly-produced pimenton like this adds enormous amounts of flavor and aroma. Unlike some of the spicier paprikas from Hungary or Western Spain, Murcia producers are adamant about the importance of the spice having rich, mellow sweetness. Philippe de Vienne, our supplier from Épices de Cru explains that, “Most Spanish paprika is made from a blend of whole peppers that are actually grown in Peru, Chili, or China with some of the more expensive and delicious genuine Spanish peppers added to achieve the grade desired. The varieties grown outside of Spain are closer to red bell peppers,” he said. “They are not pimenton. The blended peppers are ground with stems and seeds to produce ‘paprika.’ That is legal under European food regulations that essentially states that the country where the greater financial value is added to a product can be named as the country of origin. If you think that is dishonest, think of a cookie made in France with American wheat and Brazilian sugar!”

Literally, This Stuff Busted The Scales

As with all of their offerings, the de Vienne family has successfully found something so special that it exceeds pretty much all previously recognized standards. Here’s what Philippe said, “What the ASTA (American Spice Trade Association) grading refers to is the color of the paprika. Standard grades range from 60 to 160. The higher the number, the richer the color. This is not strictly an aesthetic consideration, a rich dark red color also indicates a high concentration of flavor compounds. ASTA 60 paprika is dull orange, ASTA 160 rich red and flavorful. Most paprika available on the market is between 60 and 120. The higher ASTA 140 to 160 grades are usually considered to be too expensive to be used or sold by most buyers. Grades higher than 160 are only produced on request. They make our paprika and smoked paprika to our specification using ASTA 210 (or higher pimenton) from Murcia.

An Everyday Essential in Murcia

The standard Murcian breakfast is two pieces of toasted baguette drizzled with olive oil, and a pinch each of paprika and salt. Try it—it’s terrific! Similarly, you’ll be served boiled potatoes dressed with, you guessed it, olive oil, salt, and paprika. The same setting and combination also appear on eggs, fried first in olive oil, then sprinkled with salt and pimenton. The color of the paprika—in particular this 210 paprika from Épices de Cru spreads across the fried egg like a stunning orange red sunset around the yolk.

Strangely, the region of Galicia—in the far opposite corner of Spain—is the largest purchaser of Murcia paprika because of its use in pulpo gallego: octopus boiled and spiced with salt, paprika, and probably some olive oil as well. It’s delicious—one of my favorite dishes. You can pick up octopus already cleaned at Monahan’s Seafood Market in Kerrytown. Simply cut it into chunks, bring to a boil and simmer it for a good hour or so until it’s tender. Toss with extra virgin olive oil, a good bit of this amazing paprika, some sea salt, and if you like, a squeeze of lemon. Note, when you use any paprika in cooking, be sure to add it to your pan or pot along with some liquid, or its natural sugars will quickly burn.

The full flavor of the paprika is particularly good on fresh cheese. I love it on the City Goat cheese from Zingerman’s Creamery (also available at Zingerman’s Deli). I’ve taken to dusting one side of the cheese with it, the other with the ground black pepper from India. Great in mashed potatoes, or tossed with just-cooked pasta for a super simple and amazing sauce. Sprinkle it onto salads or rice dishes or really almost anything! Rub it on meat or fish before cooking. Blend it with butter, and then put a pat of the paprika-butter onto steak or swordfish or a baked potato. Small cost, great color, big impact! Let’s toast to the power of paprika!

Paprika, as I was saying above, is a staple in Murcia. Try the recipe below for a classic dish! —

Pick a tin up at Zingerman’s Deli!