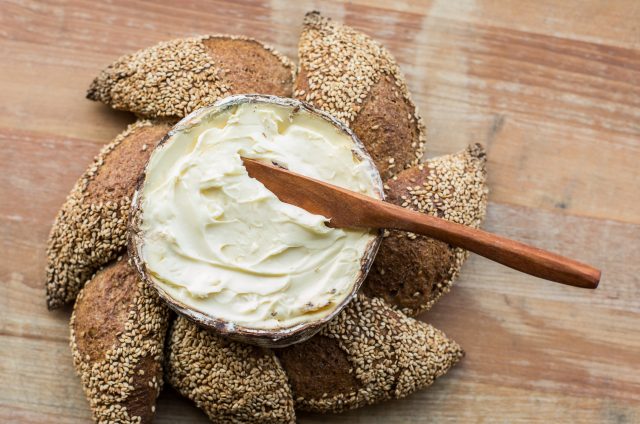 A great sensuous soft cheese from Andy Hatch, the man who also makes the award-winning Pleasant Ridge Reserve in Dodgeville, Wisconsin. Pleasant Ridge is made only when the farm’s herd is out in the pasture, from the spring through to the early autumn. When it gets too cold and wet for the cows to stay outdoors, they’re brought into the barn so the milk can’t be used for Pleasant Ridge. But it’s actually excellent milk. So, six or seven years ago Andy had the idea to turn into it this luscious new offering, and Rush Creek Reserve was born!

Rush Creek is crafted in the style of a Swiss Vacherin Mont D’Or which will likely mean little to most Ann Arborites but might raise high excitement amongst those who know and love fine French and Swiss cheeses. It’s made only in the weeks between September and November, then aged for another 8 weeks or so ‘til this time of year when it arrives! Andy says, “The Rush Creek relies on the sweetness, the texture of the milk and the heaviness of it in the fall and the delicacy of the cheese maker’s touch. As the milk comes into the autumn months, fat goes up, protein goes up, and it gets to be a bit rich for a hard cheese, but it’s perfect for a soft cheese. This type of seasonal calendar has existed for hundreds of years in parts of Europe.”

In the commitment to craft that Andy has demonstrated since day one, all of the curd for the Rush Creek is broken and stirred completely by hand to protect its fragile nature and deliciously delicate flavor. The curd is hand-ladled into forms (just as we do at the Creamery) to further protect it. Rush Creek is a washed rind cheese—thin, slightly sticky rind, wrapped in a wood band and aged for about 8 weeks so that it’s nice and creamy and sort of prototypically unctuous inside. The wood is first inoculated with bacteria in order to start the ripening of the cheese. The washing of the young cheeses is done with a brine solution that’s saved after it’s first used to wash the rinds of the already aging Pleasant Ridge. In doing that, Andy accesses the nuances of the Pleasant Ridge and uses them like a starter culture to enhance the flavors of the Rush Creek.

While it’s difficult to make, Rush Creek is easy to eat.

The truth is you could just spoon it out of the rind and eat it as is. I really like to eat it atop just-cooked potatoes, and we should still be able to find some good, locally grown ones out there to steam up. I like the potatoes cooked ‘til they’re really tender, then cracked open. Drop on a bit of butter, some sea salt, a good grind of that Yupanqui black pepper from Ecuador and then spoon on the Rush Creek. I leave the rind behind—just spoon out the creamy center of the cheese. Eat it with a couple good slices of Zingerman’s Bakehouse Country Miche—I buy the big, 2-kilo loaves, hopefully one with an especially dark crust. It’s memorably delicious, maybe even meaningfully romantic—it’s one of the first meals I ever made for Tammie many years ago and she still talks about it!

You can just put Rush Creek out at room temperature with some good bread—the Roadhouse bread (with the rye flour now being milled at the Bakehouse)! Rush Creek is pretty darned good with French Fries, too. Nice in an omelet, or melted over roasted root vegetables—parsnip, rutabaga, etc. Because you buy the whole 12-ounce wheel, it’s really a cheese for sharing, which, of course, we’re all about (see Secret #46, The Spirit of Generosity, for more on the subject!)

Writing in The New York Times, famous food writer Florence Fabricant said that Rush Creek is, “fluent and satiny, with a rich, slightly grassy aroma and a mild flavor that hints of smoke and pork.” Seriously, this is a very special, very-limited-edition cheese. We only have it for a few months, so rush—pun intended—on over soon! —

The Rush Creek Reserve is available at the Deli!