Local canines and cats star on this annual calendar that raises money for SafeHouse Center! 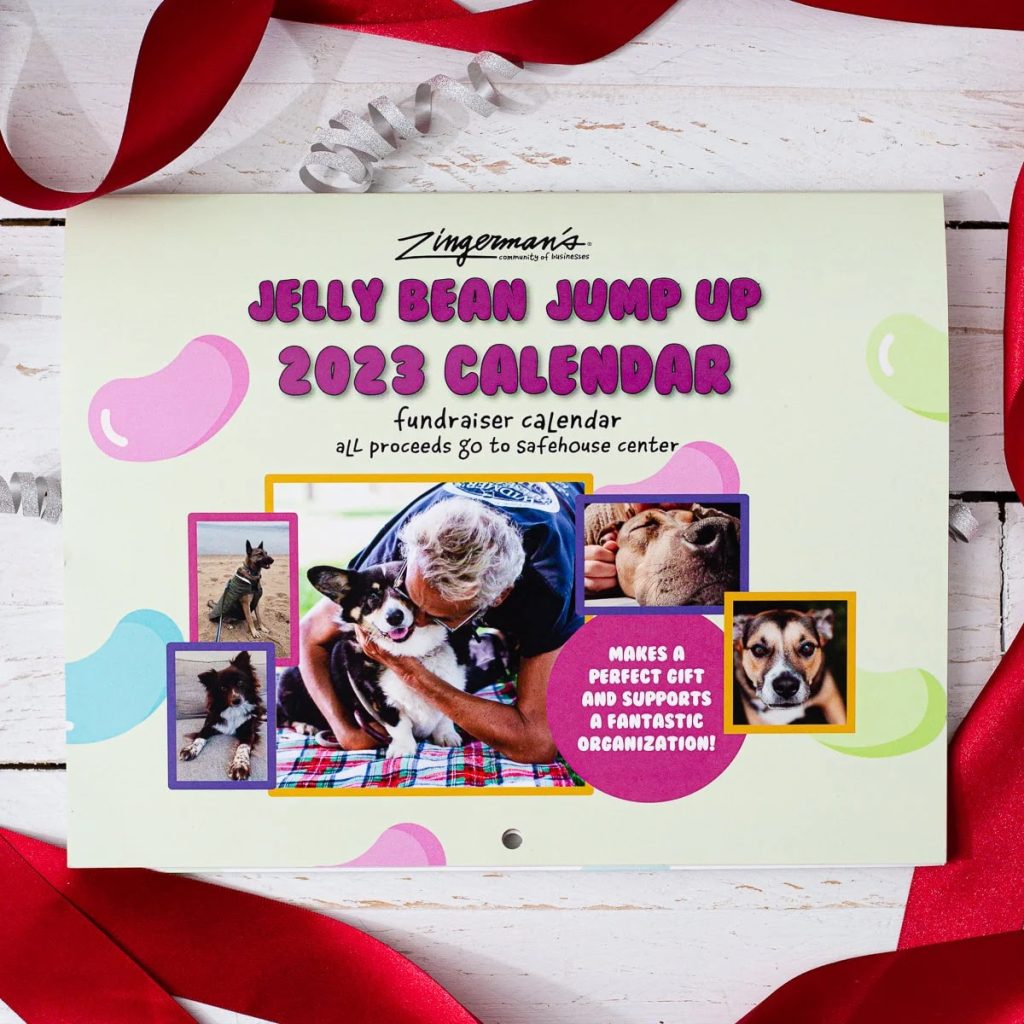 This week marks the start of the 8th annual Jelly Bean Jump Up, our yearly fundraiser for SafeHouse Center. The bulk of the event will actually take place in the winter—February and a couple really cool events in March—but we’re getting things moving now by putting out the Jelly Bean Jump Up Calendars for 2023. They feature a whole host of dogs and cats from around ZCoB, including four from our house (Pepper is the cover boy; Blu, Eva, and Chance Edward Chance are inside) as well other wonderful pets from around the ‘CoB, like Stacy Walsh’s super cute little pup Mocha in December and Melaina Bukowski’s Frankie in October.

The earliest paper calendars date back to Gutenberg’s invention of the printing press. Three years before American independence, publisher Robert Aitkin invented what’s said to be the first commercially available planner. Paper calendars became popular during the Industrial Revolution, after the end of the American Civil War. In ancient times, calendars had mostly been painted on walls, carved into stones, etc.; the early paper offerings were really only for those with enough money to afford them. Industrial scale printing on paper—both calendars, and their personal corollary, “the planner”—was a way to democratize what had previously been pretty much an upper-class resource.

The Jump Up started in the winter of 2016, after the death of my much-loved Corgi, Jelly Bean, the previous spring. If you’ve lost a beloved companion (person or pet), you will likely have some sense of what I was going through. She and I had been together for a remarkable 17 years. (If you want to see the obituary I wrote for her, drop me an email.) Although grief can feel overwhelming, there are ways to slowly, gently, shift it—painfully, at times—into something constructive. I wanted to take the pain and put it into a positive program that would benefit the greater good. Marsha Ricevuto, who knew Jelly Bean well and cared for her so many times when I went out of town over the years, suggested the idea of a “Jump Up.” Nine months later it happened. Tammie and I wanted to do it for SafeHouse, in part because we live nearby and all the staff would see Jelly Bean and me jogging every day, but more importantly, because providing a safe space for the victims of domestic abuse as SafeHouse does is so important. And now the Jelly Bean Jump Up is an annual tradition to help support those whose lives and safety are under threat in our community.

Looking ahead, this year’s Jump Up will wrap up on March 14—the day before our 41st anniversary— when we will do a special dinner at the Roadhouse, featuring Marie Rose and wild Alaska salmon from Shoreline. Marie, who found her vocation in fishing, is also a big supporter of this cause:

Just as we aim to be mindful of how we harvest and handle wild salmon in Alaska, we also strive to foster partnerships that help to support the safety and well being of the communities in which we operate. Organizations like the SafeHouse Center that provide resources for survivors of sexual assault and intimate partner domestic violence are essential for fostering a healthy community. We are grateful to work alongside Zingerman’s to help fundraise for this important cause.

You can find the calendars at the Deli. If you’d like to have some shipped, send an email to Melaina who coordinates all our community giving and she’ll get you set up. In fact, right when they came back from Dollar Bill, Jenny Santi at the Deli said:

A guest from New York called the Deli about Jelly Bean Jump Up calendars. We didn’t have them yet, so I’ve been emailing with him and finally was able to sell him one and get his mail address so we could put it in the mail for him. He thanked me and said the calendar was a gift for his daughter, who is “obsessed with this calendar and its cause!”

The calendars sell for $20. If you want to give more, that’s great. If you can’t afford the $20, we’ll figure out a way to make it work together. ALL the proceeds go to SafeHouse. Every dollar makes a difference!

> GET THIS PAWSOME CALENDAR!