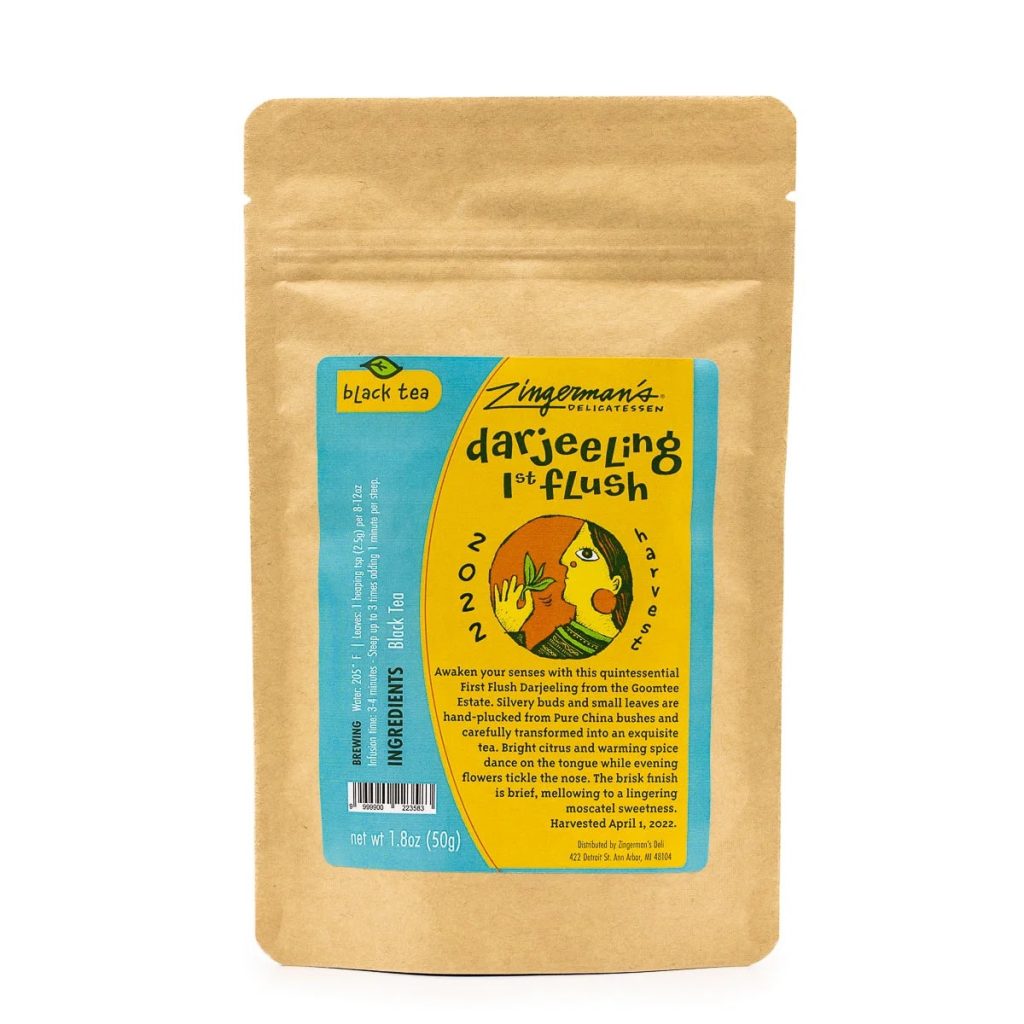 First Flush Darjeeling is one of my favorite teas of all time. It’s a tea that tastes like no other, evokes emotion, and calls up my creative spirit. Smelling its aroma (both the dry leaves and then again as it’s brewing) and sipping it, as I’ve been doing regularly for the last week or so, is a beautiful thing.

Back when we began this work in the late 80s, First Flush Darjeeling was barely known in the U.S. outside a small group of tea aficionados. At the time, tea bags with fancy labels imported from England were considered high-end. By comparison, First Flush seemed incredibly exotic. It was hardly a big seller back then, but my personal passion (and I suppose emotional resilience) kept me working on it for long enough that it has, over time, gained a much bigger following. What was considered kind of crazy by mainstream specialty food folks at the time has, happily, become a celebrated annual event. Each year, for something like 30 years now, we have been bringing this first-picking-of-the-new-season Darjeeling to the Deli.

We start the process each year by tasting a range of samples from different gardens, or estates. For the last few years, Jackson Konwinski has led the work to do the selection. This year we settled on the tea from the Goomtee Estate. The estate goes all the way back to 1899, the year that Henry Lennox planted the first tea bushes. It was right about at the halfway point of British colonial rule, which ran from 1858 to independence in 1947.

By the long standards of Indian history, tea growing in Darjeeling is a relatively recent phenomenon, dating only to the middle of the 19th century. In the northeast of India, the region is much closer to the borders with Bhutan, Nepal, or Bangladesh than to Mumbai or New Delhi. At the time, the town itself was tiny, used pretty much just as a resort and cool weather escape for the country’s well-to-do classes. The mean temperature of the area overall is only a couple of degrees higher than London, but there’s a broad fluctuation as you move through the seasons and up into the higher altitudes. The mountainous terrain makes planting and picking exceptionally difficult, adding a lot to the cost of Darjeeling in comparison to tea grown on more level terrain. Using the (all important for quality) Orthodox plucking method the best Darjeelings like this one take only the newest two leaves and the bud at the end of each branch. You need to pluck something like 11,000 shoots to make a pound of good tea.

Darjeeling is a relatively small area with a disproportionate but well-deserved reputation for exceptional and excellent tea, which makes me think of the wealth of wineries in Napa Valley. While Darjeeling’s name recognition is high, supply is low. All told—the top quality and low grade combined—Darjeeling teas account for less than three percent of what’s grown in India. Of that Darjeeling, only ten percent or so is First Flush. Of that, only about a quarter can be counted on to be of top quality. Beware that more “Darjeeling” tea is sold each year than is grown in the district.

Ashok Das is the managing partner of the Goomtee Garden. He’s been working at the estate for over four decades now, and is, not surprisingly, all about resilience:

My father built the tea factory as well as this bungalow. My family has been associated with the estate for the past 60 years and I have been here for the past 40. My father and I were always very clear that our objective was to maintain a quality garden and profitable business.

There has been much talk about how expensive the “real Darjeeling tea” is but if you think that mixing poor quality tea with it to bring down the price will help your cup, you are mistaken. Once you have tasted true Darjeeling tea, there is no going back. The tea of Darjeeling is not just something you add hot water to. When you come to Darjeeling, experience the tranquility of a tea estate, breathe in the pure fresh air and witness the tea being made in several steps, you see the story behind the tea. That is the side journey to every cup of Darjeeling tea that you savour.

The flavor of the 2022 First Flush is, as I would always hope, exceptional. Clear, compelling, and sharp enough to wake me up when I’m feeling foggy. Jackson says it has “Silvery buds and small leaves … Bright citrus and warming spice dance on the tongue.” Kevin Gascoyne, one of our longtime tea brokers who lives in Montreal and who sourced this year’s selection says, “This exclusive lot has a liquor with a full, vibrant, and herbal opening. A slightly saline background with woodsy and spicy notes, followed by a muscatel burst, the signature of the terroir. A tea with a remarkably persistent aftertaste.” I’ve long thought of First Flush Darjeeling a bit like free jazz—intentionally a little out of balance, attention-getting, thought-provoking, and inspiring in the best possible way. Like free jazz it’s not for everyone, but for the right people—of which I’m clearly one—it’s an inspiration. As Thelonius Monk once said, “You got to pick the notes you really mean!” For me, First Flush Darjeeling is definitely one of those notes. I mean it!