An ancient way of crafting chocolate, carried on in Sicily 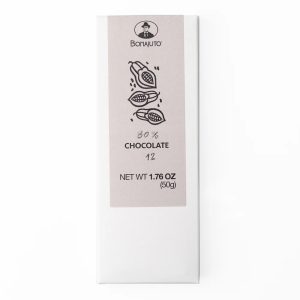 I first heard about the Dolceria Bonajuto in the fall of 2002. Three different food people—all of whose palates I respect enormously—told me about it, independently, within a few weeks of each other. Six months later, I was there to visit. From a “discovery” standpoint, I was about 120 years late—the family has been making chocolate since 1880. Today the Dolceria is run with great passion and energy by Pierpaolo Ruta, the sixth generation to do so. The artisan workshop where they make the chocolate has grown a great deal over the years, but everything is pretty much still done as it was a century ago.

Up until the 19th century, Modica was known for its ciucculattari—men who would go from home to home to offer fresh, on-site grinding of cacao beans, mixing them for the family with sugar to make chocolate to order. What the Rutas are making at the Dolceria today is not much different from what the ciucculatarri were doing a few hundred years ago. Back when I went to visit for the first time, there might have been one other chocolate maker in town. Today, there are nearly 20, but everyone whose taste I trust tells me the same thing—Bonajuto is still the best.

“There are two things that make our chocolate unique,” Pierpaolo’s father, Franco, explained to me when I was there. “First, we work at cool temperatures. We never go over 40 degrees Celsius.” This relatively low temperature means that the cocoa butter naturally present in the beans can soften enough for the chocolate to be worked, while keeping the volatile aromas intact. “Secondly,” Franco continued, “because we keep the temperature cool and we don’t conch the chocolate, the sugar crystals never really dissolve.” Conching is the process (invented by Rodolphe Lindt in 1879 in Switzerland, the year before Bonajuto began) with which stainless steel rollers are moved back and forth through the liquid chocolate, slowly smoothing its texture, and softening the sharp edges of the sugar crystals. Many producers also add back additional cocoa butter at this stage to help make a more richly textured chocolate, but the Rutas do not. As a result, the Bonajuto chocolate is less creamy, and maybe more intensely chocolatey, than other bars of similar cocoa content.

What Bonajuto makes is pretty much the same as what a 19th-century Sicilian would have been eating regularly. You’ll feel the coarseness of the chocolate immediately. As you chew, you’ll notice the light flickering of the sugar and cacao crystals as they crackle across your tongue. The chocolate flavor is big. Their two original bars are further enhanced lightly by vanilla, or, alternatively by a bit of ground cinnamon. The finish is clean and lively. In recent years, they’ve added a series of extra dark chocolate bars—we have 70%, 80%, and a very dark 90%! There’s also an excellent dark chocolate bar that’s spiced with crushed cardamom seed. All are terrific. Because there’s no cocoa butter added back, the bars are less susceptible to super quick melting in the summer heat, which makes them a great choice for this time of year.

When I visited all those years ago, Pierpaolo told me that “everyone” around Modica eats bread with chocolate. This memory drove me to break open a bar and then tear into a nice golden loaf of the Bakehouse’s Sicilian Sesame Semolina bread and try the two together. The sesame seeds are typical of the Arab influence on Sicilian cooking and are a great flavor combination with the chocolate. I had some this morning with my coffee while I tried to imagine myself walking down the street in 1880 to visit a newly-opened chocolate shop in the center of town. The technology has changed enormously, but the chocolate and the generous spirit of the family running the shop are just as they were 122 years ago.