An Easter tradition from England, made better with whole grains! 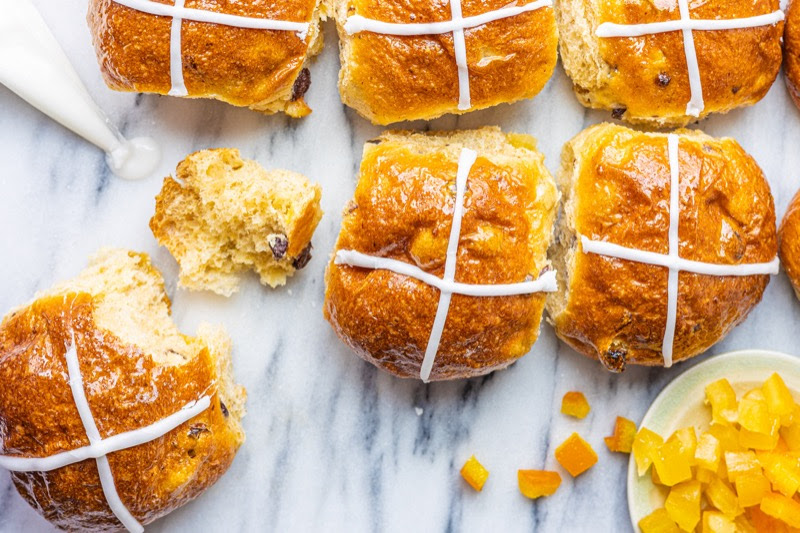 For centuries now, English people have marked the end of the culinary abstinence of the Lenten period in part by eating Hot Cross Buns! In celebration of Good Friday and Easter, Zingerman’s Bakehouse makes a special bake of Hot Cross Buns!

The origins of Hot Cross Buns aren’t quite clear, but it is certain that they have been eaten in England for many centuries. The Bakehouse’s Lee Vedder wrote a beautiful piece that gets into a wealth of wonderful historical detail. And while, as you know, I’m a huge fan of history, I have Hot Cross Buns on my mind because of a handful of terrific improvements that were made to the recipe in 2022. Based on the excitement about them inside our organization, I will predict that they are about to become even more popular still. Order yours ahead so you don’t miss out!

As is so often the case here at Zingerman’s, the changes to the Hot Cross Buns were initiated by our commitment to vision. Our 2032 Vision (which is included, in full, in the new pamphlet) states:

Every dish we serve is fantastic. Flavor is consistently fuller and we’ve achieved this, in part, because we’ve never stopped asking, “How can it be better?” Finishes are longer; the complexity of flavor has been taken to new heights.

The Bakehouse’s improvement of the Hot Cross Buns is just one example of the work being done in the ZCoB to make the vision a reality. Amy Emberling, co-managing partner at the Bakehouse, shares, “We liked what we were doing, but we are never 100-percent satisfied. At the outset, our goal was to make our buns more moist and more flavorful, and I think we’ve done it–our new version literally makes me giddy!” As Amy details in her own essay, the changes we’ve made are:

The results are inspiring, both intellectually and culinarily. And as Amy says, “Our Hot Cross Buns are now as complex as their long history!” The nice thing for all of us is that enjoying the resulting flavor is very simple to do. Just take a bite!

> THIS IS A SEASONAL ITEM AND IS AVAILABLE IN THE SPRING. CHECK FOR AVAILABILITY!