The original full cream Switzerland Swiss at the Deli 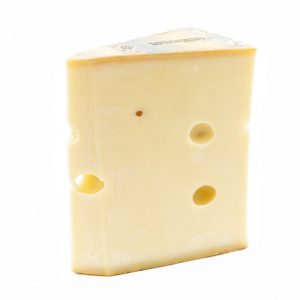 Although I grew on the shores of Lake Michigan, I have a thing for mountain cheeses. Right now, this artisan Rahmtaler, cut from wheels so big they weigh more than I do, is one of my favorites. Buttery with a hint of hazelnut, maybe a little touch of sweetness that reminds me subtly of black cherry, and a bit of cooked cream, it’s terrific just to eat as is. Or put it on a sandwich, spread it with good mustard, pair it with slices of cured or cooked ham, add it to mac and cheese, or melt it into fondue. It holds up pretty well in the heat, so keep it in mind for picnics and outdoor parties. It’s a great pairing with a bit of butter and some slices of that very fine Vollkornbrot from the Bakehouse I wrote about a few weeks ago.

We’ve been using “Switzerland Swiss,” cheese on the Deli’s sandwiches and retailing the traditional Emmental from the 200-pound wheels since we opened all the way back in 1982. The latter has long been from partially skimmed milk and crafted in those huge wheels. It has the classic “eyes,” or holes, that the world sees as “Swiss,” and that meaningful but still modest mountain cheese flavor. Best I understood when I first started studying cheese, Emmental was the traditional way of making the cheese and was certainly far more authentic than the commonly used American factory versions.

Like so many things, what I’ve learned over the last 40 years has given me a deeper understanding of the cheese. What I took to be totally traditional was, in fact, only about 200 years old. Skimming the cream off the milk dates to about the early 19th century when butter exports became bigger and bigger business. Skimming gave added income. Emmentaler got a bit leaner, but farmers got richer. Or at least were a bit more able to support their families. By the early years of the 20th century, the old format—with the cream left in—had pretty much completely disappeared. The Rahmtaler, which dates back to the 16th century, is creamier and has a more tender and smoother texture.

The Rahmtaler we have right now is handmade by Hansruedi Gasser, one of only three makers who craft this old school, raw milk Swiss. “Rahm,” in Swiss German, means “cream,” and “tal” means “valley.” The dairy looks out at Schallenberg mountain near the town of Thun, from which a winding road will lead you up to the pass at over 1000 meters above sea level. I haven’t seen it myself, but the view is supposed to be superb. The road at the top of the mountain is one of the highest paved passes in the world—bicyclists take it on regularly as a challenge, and often stop at the dairy to fuel up during their rides. The area is also home to the big, beautiful, and very lovable Schallenberg Bernese Mountain dogs who used to accompany herdsman and cheesemakers as they travelled up and down the mountains, and now are favorites of large-breed dog lovers all over the world. (Although it has no impact on the cheese, one of Hansruedi’s favorite hobbies is playing the Swiss game of Hornussen. I’ve never tried it but apparently it’s like golf-meets-baseball and is commonly referred to as “Swiss Farmers Golf.” You can see more here.)

The herds for Hansruedi’s cheese graze only in open pastures so they’re eating a diverse diet of mountain herbs and grasses, meaning the complexity and character of the milk is very good. The dairy is really quite tiny by commercial standards. Just ten farmers sell them milk, delivering both morning and evening. Most of their production work is given over to the making of the more common, modern version of a wonderful Emmental Swiss made with skimmed milk. Over the years though Hansruedi become increasingly passionate about making the Rahmtaler. Our sage importer Joe Salonia, who worked hard to help get the Rahmtaler reintroduced, shares, “Hansruedi is convinced of the cream added recipe and passionate about its production. The creamy Emmentaler alternative is very popular in their local cheese shop. However, the production volume of Rahmtaler is very low, since they focus most of the daily production on Emmentaler.”

The Rahmtaler wheels are brought to the Reichenbach Mountain bunkers for affinage. The Rahmtaler are regularly washed with water and salt until their release, up to 15 months for Reserve selection. The result, as I’ve said, is superb. Whether it’s for snacks, sandwiches, or sauces, Rahmtaler is a really great way to go! Enjoy! Or as one would say in Swiss German, “en Guete!”