Handmade organic salt from the coast of Wales 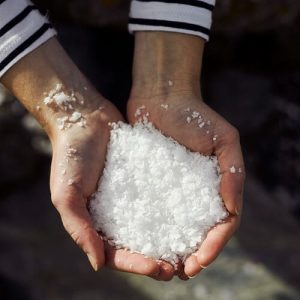 Certainly, no one needs salt from Wales to get through their week. That said, this is a product that brings so many of our values and purposes to life—it’s got a lovely, delicate, almost sweet flavor. Made by David Lea-Wilson, along with his wife Alison, it’s produced using traditional artisan methods that go back centuries. They’re dedicated to their ecosystem—David has been actively doing organic gardening for decades and shifted towards biodynamics—and the salt is certified organic. They committed early on to the study and mastery of old style British salt-making. And through their work they bring beauty at many levels to the rest of our lives. A few flakes sprinkled on a piece of bruschetta made with toasted Country Miche bread, or on steamed local potatoes dressed with really good olive oil like the new harvest Agrilia Estate oil from the island of Antiparos that I wrote about last week, will add a little much needed loveliness and sparkle to your life. As David and Alison say, the pyramid shaped white salt crystals are like tiny “diamonds of the sea.”

Speaking of islands, Halen Môn is made on Anglesey, Wales’ largest island (Halen Môn simply means “Anglesey Salt” in Welsh). The tradition of salt making goes back thousands of years but had completely disappeared for centuries until David and Alison got it going again in 1997. We’ve been buying from them almost since their beginnings. Years ago, David and Alison were running the Anglesey Sea Zoo and struggling with the financial challenge of being busy in the summer (to the tune of 100,000 visitors) and slow the rest of the year. David got a grant to do research on salt and he’s a good student. He ended up making some of the best natural sea salt in the world on the Welsh coast. 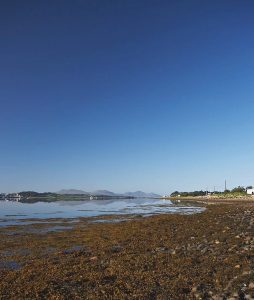 To make the Halen Môn, natural seawater is drawn in at the beach in the town of Brynsiencyn, filtered, and then gently simmered over a period of days until the natural salt crystals form and are skimmed from the remaining water. The quality of the salt is significantly improved because of the cleanliness of the seawater off the coast of Wales. There’s an abundance of natural mussel beds nearby—each little mollusk filters nine pints of water an hour. The seawater starts at about three percent salt, and within a week it’s up to twenty. The work is a blend of art and science. The results, I suppose, are the same—scientifically interesting to see the shape the crystals take on, and culinarily enjoyable to eat it. “Basically we ‘break’ the sea water and release the crystals,” David explains. “It’s a week from sea to salt. It’s a fairly gentle process. It takes 33 liters to make a kilo of salt. People can’t believe that we don’t do something to purify the salt, but we’re just in a very clear area.”

During the boiling the salt forms naturally into beautiful, pyramid-shaped, translucent white crystals so special you’ll want to display them on the table to help spur conversation between courses. I would imagine that kids would love to taste it and cook with it because it looks so cool, and because the textural experience of having it melt on their tongue or crunching it would be very unusual for them. It’s snowflake-shaped crystalline structure gives a good crunch to the foods it’s on, and does not melt when put on hot food. About the brilliant color, Alison proudly explains, “It’s extremely white; in fact, it sparkles. People have said we must bleach it, but we don’t.”

Halen Môn also makes smoked salt that’s gently infused with smoke from Welsh oak chippings, and has a sweeter edge. It’s definitely a culinary jewel whose uniqueness can be used to uplift almost any dish.