Sandwich of the Month

Try the Ron’s Buster Sword, January’s Sandwich of the Month 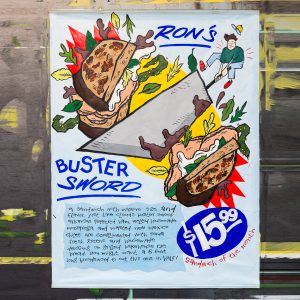 Final Fantasy fans will understand right away that our January Sandwich of the Month is both massive in size and flavor, just like Cloud’s oversized weapon of choice, the Buster Sword. For those of you who aren’t gamers and who think that Twitch is akin to a tic, let us explain.

Deli staffer Ron M. set out to create a sandwich that would feature some of his favorite Deli sandwich ingredients, like the Arkansas peppered ham and New Mexico fire roasted chiles. When he reached this flavor combination with the ham, chiles and mozzarella and house dressing–he knew he was on to something special! He took one bite and knew that he needed to name his creation Buster Sword, a weapon used by Cloud Strife in the video game series Final Fantasy VII. The broadsword is oversized and about 6 feet in length! This weapon has an accuracy of 96% in the game, but we’re going for 100% satisfied when you eat this sandwich.

To order the Sandwich of the Month: