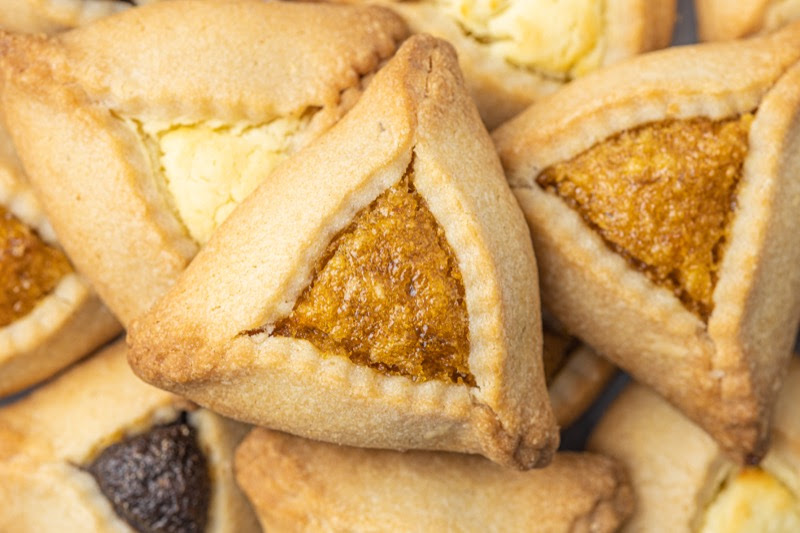 Purim is the Jewish holiday that celebrates the Persian Jews outwitting the wicked minister Haman who was out to annihilate them. Haman was going to have all the Jews put to death, but the uncle (Mordechai) of the Queen (Esther) found out about Haman’s evil intentions and passed word to his niece (Queen Esther) who in turn told the King, who then put Haman to death instead of the Jews. Hamentaschen are a triangular shaped cookie that are enjoyed on this one night holiday. The triangular shape was said to be derived from the three-cornered hat that Haman wore. A different origin story is that they were made by central European Jews based on the German mohntaschen—a poppyseed filled pastry pocket. However they came to be, they do taste terrific at Purim or any time of the year. They’ve been Paul’s favorite pastry for as long as I can remember!

The modern-day tradition around Purim calls for kids to dress up in costume, traditionally as Queen Esther, Mordechai, Haman, etc. The night Purim begins, Jews gather at the synagogue to read the Megillah—the story of Purim. Every time Haman’s name comes up in the reading, kids swing old-fashioned noise makers. The best thing of all about Purim from a culinary standpoint, is most definitely, Hamantaschen. These beautiful little all-butter cookie dough crust pockets are stuffed with an array of fillings: the Creamery’s cream cheese, mixed with Vanilla bean; Apricot; Hungarian Prune with Walnuts; and, Paul’s favorite, Dutch Poppy Seed. All are excellent.

It’s a Jewish tradition to bring gifts at Purim, so a box of Hamantaschen dropped off at the office or your neighbor’s house would be a great way to do that.

> THIS IS A SEASONAL ITEM AVAILABLE IN EARLY SPRING FOR PURIM. CHECK FOR AVAILABILITY!