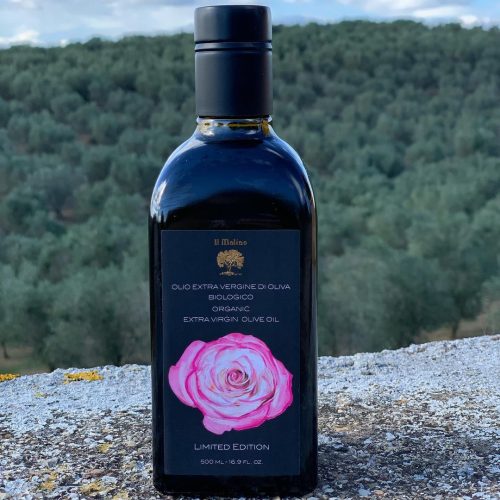 The new crop 2021 olive oils, harvested a few months ago in the fall of 2021, are starting to arrive! The new crop of Il Molino oil from central Italy is super tasty—seriously, it’s another of those particularly delightful, so good that I gotta write about them here, sorts of products that we specialize in.

The Il Molino estate (a restored 17th century farmhouse) is located in Montefiascone in the north of the region of Lazio near the town of Viterbo, and near the shore of the beautiful Lago Bolsena. Although olives and oil have been produced on the estate for hundreds of years, it’s only in the last 15 years or so that their oil has been sold under the Il Molino label. Unlike most modern commercial olive farms, the trees are very old (some over 200 years) and the spacing of the trees in the field is much wider. The land has been in Annalisa and Mauro Torzill’s family since the 18th century. The olives are pressed within a very impressive 3 to 4 hours of picking (anything under 24 hours is considered to be quite good), again contributing to quality. They store the oil under nitrogen to protect it from oxidation. Notably, Annalisa is adamant about sustainable farming—their oil is certified organic.

Right now we have a particularly special part of the Il Molino production–we’re calling it the Rose Limited Edition Olive Oil. It comes from very old trees, right near the Lago Bolsena—the lake’s microclimate makes for a magical oil. It’s harvested exceptionally early, and is a blend of Frantoio, Leccino, and the hard to find, local Caninese. Il Molino has won a wealth of awards over the last few years, and for good reason—the oil is really terrific! The aroma brings both hints of fresh butter and a lovely bit of green grassiness. The flavor is very different from any other oil we’ve got—it’s both sweet and peppery at the same time. It’s excellent on salads of spicy greens like arugula where its simultaneous sweetness and spiciness show to full effect. Same can be said for roast pork, beef, cooked greens, or pasta (this oil over the Senatore Capelli spaghetti with some grated Parmigiano Reggiano would be great). And for me, the best snack in the world is a slice of Bakehouse Bread—maybe True North or Paesano—toasted and topped with some of this olive oil and a bit of Fleur de Sel.

Only about 2000 bottles of this special oil were produced in 2021. Buy a bottle—or two—while it’s fresh and superfine!