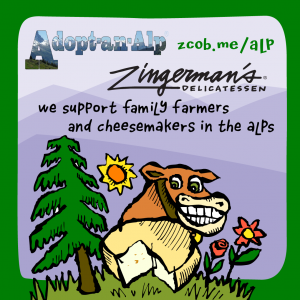 We’re bringing you Tompey L’Etivaz AOP cheese as part of the Adopt and Alp effort.  Each year since 2015, Zingerman’s Delicatessen has helped support the family farmers and cheesemakers in the Alps of Switzerland through our Adopt An Alp effort. We import different Alpage cheeses–each with a special story about the lifestyle, traditions, people and animals who seasonally move around the Alps to make these incredible cheeses. We invite you to learn, buy, and enjoy these cheeses with us!

Ari writes about this cheese in the Nov/Dec 2020 Zingerman’s Newsletter. The following is an excerpt from that newsletter entitled L’Etivaz cheese from the Zjörien family.

I first stumbled on L’Etivaz in the summer of 1994 on a cheese hunting trip to the Alps with my friends Randolph Hodgson from Neals Yard Dairy and Daphne Zepos (see the Epilogue of Zingerman’s Guide to Good Leading: Part 3 for more on Daphne’s life and death). At the time, none of us had ever heard of it. We found it by accident—a sighting of wooden cheese-aging shelves drying in the sun by the side of the road clued us in that we were near a small dairy. We stopped. The story and the details were as great as the cheese. An hour down the road, we were still talking about how fine the finish of the cheese was.

It took a year or two to get it to Ann Arbor, and it’s made regular appearances at the Deli ever since. L’Etivaz is everything I love about great food: a superb sandwich of phenomenal flavor and incredible history. A product that owes its existence to the near-fanatical passion of the people who make it; dairy rebels with a cause, committed to maintaining their heritage. But, above and beyond all else, what makes L’Etivaz more than just a good story is how incredibly good it tastes.

In 1932, while most of the cheese world was choosing industrialization, 76 families who farmed the land around the town of L’Etivaz decided to go in the other direction. In doing so, they turned away from significant government subsidies afforded to officially-approved cheesemakers in Switzerland. In the process, they made a clear choice for integrity over income.

The L’Etivaz makers set up an exceptionally strict code of production, oriented toward preserving tradition and authenticity:

This cheese comes to us from the dairy of the Zjörien family on the Alp named Tompey, overlooking Lake Geneva. From roughly early June to the final days of September the Zjöriens shift their living quarters to a chalet atop the mountain. Their 70 or so cows (a mix of Red Holstein, Holstein, Simmental, and Swiss Brown) go with them, along with a trio of donkeys, their two dogs (“Rocky” and “Bob”), and a few chickens and pigs. During that time, they produce about 250 wheels—roughly two wheels a day.

The cheese we have on hand has about 16 months of maturing on it right now. It’s so good, I could happily eat some every day for the rest of the calendar year! One sliver will tell you that a well-aged wheel of L’Etivaz is something special: exceptionally buttery, with just the slightest hint of spice; surprisingly sweet, and not at all salty or bitter; somewhat less fruity than a comparably-aged Gruyère. It fills your mouth with flavor, and finishes with a tiny wisp of wood smoke, the mark of the open wood fires over which it is made. Supplies are super limited! Don’t miss out!

> SHOP THIS CHEESE ONLINE AT THE DELI

> SHOP ALL ADOPT AN ALP CHEESES AT THE DELI