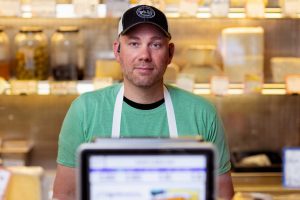 Sean Hartwig, like many Deli staff members, grew up in a family who loved to cook and showed love through food. He says food was the basis of his family get-togethers and holds a special place in his childhood memories. 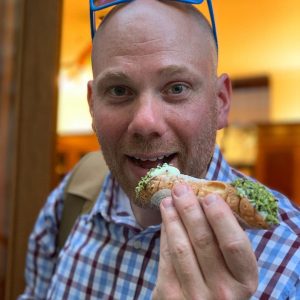 “My grandma made me rhubarb pie for my birthday many years ago. The sentiment that swirls and blends with the perceived smells and flavors of those pies renders me a weepy mess,” he said.

Sean’s first stint at the Deli took place in the late ‘90s when he followed a girlfriend to Ann Arbor. He applied for a job coming off years of working in Grand Rapids kitchens in high school. He was hired by Toni Morell, today one of Zingerman’s Mail Order’s Managing Partners, who at the time was manager of the Deli’s dried goods department.

He remembers thinking the Deli’s training process was very insightful and beneficial. Specifically, he recalls taking part in a vertical tasting of olive oils from Tuscany where he learned why different oils taste the way they do and had the chance to ask questions for clarity to really understand the products.

“I think we all relate to these foods and flavors – it’s an innate appreciation for the simplicity of traditional foods,” Sean said.

He says that was his first real glimpse of understanding the value of traditionally made food and ingredients unto themselves – olive oil, sea salt, tea – and where he started building up a lexicon of knowledge.

Sean’s Path to the Deli 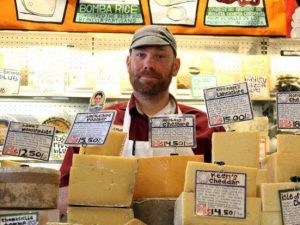 After departing the Deli to study, travel, and spend time managing Ann Arbor’s specialty grocery Morgan and York, Sean returned to the Deli in November of 2011. Since his return, his curiosity and love of learning has served him well as the Deli’s specialty foods manager, where his expertise includes an extensive knowledge of cheese. He approaches each day ready to learn and cultivate a positive community around food. He says he’d like to be known for his love of food and service.

Sean studied both formally and informally in places across the globe. He formally studied in Michigan’s Upper Peninsula, lived and studied in the French Basque Pyrenees and earned a certificate of business from University of Paris.
“Travel is innate once you get the bug for learning about food. So many things at the Deli don’t come from anywhere nearby. I got the travel bug early to understand growers, producers, and stories. I spent a lot of time in western Europe, trying to suss out how all of these things come together and what leads to these amazing products we sell on a daily basis,” he said.

Sean has immersed himself in food, service and financial knowledge for many years. Though this is still a vital part of his work, he’s currently focused on hiring, training and developing new food enthusiasts, and is very driven by the Deli’s new virtual events.

“There are so many moving parts of our operations right now! The rutter that guides my inner calm and also fuels my efforts is our events and tastings. Thanks to a bunch of folks, we are at the nascent stages of really cool events across the flavor and financial spectrum,” he said. 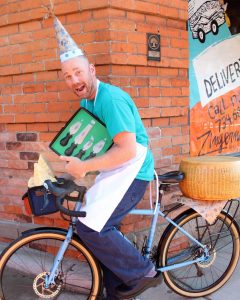 Sean says he loves to learn new skills that tend to become hobbies in the short term. The ones that have lasted the longest are cycling and outdoor adventure.

“I feel very fortunate to have so many life experiences and opportunities, in good part, thanks to our organization and the deli. Many peers have come and gone on to doing great things for our world. The daily recommitment to our work and ideals is truly inspiring,” he said.

Explore the world of terroir and taste with Sean and other Deli experts by signing up for one of the Deli’s virtual or in person events. Browse the calendar and sign up here.